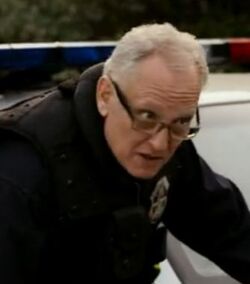 Keaton is a bomb technician who works for the ATF.

In "Loose Ends", Keaton is called over to Lemuel Becket's place by Tom Bergen after Tanner Dodd turns himself in while he is standing on top of a land mine. Keaton acknowledges that Becket knows more about explosives than most of his men in the ATF. Keaton announces to Dodd that it may take hours to defuse the bomb, much to Dodd's disgust and impatience. However, Keaton doesn't get a chance to defuse the bomb because Dodd's gun accidentally slips out of his hand, causing the bomb to arm itself due to the shift in weight.

Retrieved from "https://justified.fandom.com/wiki/ATF_Agent_Keaton?oldid=17695"
Community content is available under CC-BY-SA unless otherwise noted.