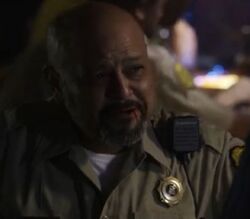 Aguilar is a recurring character in the fifth and sixth season of the FX series Justified. Aguilar is a Federale in Mexico who confiscates the van filled with dead bodies from Boyd Crowder. He is portrayed by guest star Rolando Molina.

In "Whistle Past the Graveyard", Aguilar and his fellow Federales stops Boyd and his crew in the desert, shaking them down for $2,000 and confiscating their van that they hope is filled with heroin. Turns out Boyd moved the drugs into the smaller car, and that the van is filled only with the bodies of Johnny Crowder and Rodney Dunham's men that were killed by the Crowes during the exchange.

In "Fate's Right Hand", Raylan goes down to Mexico to visit him at a bar for information about the heroin smuggling and the dead body of Johnny Crowder. Aguilar refuses to cooperate, insulting Raylan and his Marshal's badge for having no power in Mexico. Raylan takes the hint; not by getting out of town, but by waiting until "later". An nsuspecting and very drunk Aguilar emerges from the bar, waves goodbye to his fellow Federales and climbs into his police car. Raylan, behind the wheel of his own car, slams into the car, stuffs a groggy Aguilar into the boot, and takes him to American soil, where the badge does have power.

Aguilar ends up in El Paso lockup, but not before he gives Dewey Crowe's name to Raylan.

Retrieved from "https://justified.fandom.com/wiki/Aguilar?oldid=22075"
Community content is available under CC-BY-SA unless otherwise noted.