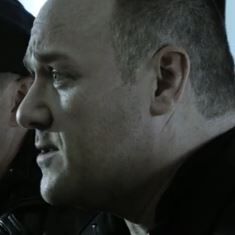 Al Sura is a recurring character in the fifth season of the FX series Justified. He was a representative of the Canadian mafia that Sammy Tonin owed money to. In "Shot All to Hell", He is shot and killed by Elias Marcos, who interrogates him on information he told the US Marshals. He was portrayed by guest star Will Sasso.

In "A Murder of Crowes", Picker tells Boyd Crowder that Sammy owed almost $1,000,000 to the Canadian mafia and that he struck a deal: He'd give them the money and kill Sammy, and in exchange, they wouldn't kill Picker. Sura initally is more interested in talking about the history of Tim Horton and the donut shop until an impatient Boyd stops them. Sura tells them that Boyd will get one more shipment and he will let him know in a few days when it will arrive.

In "Over the Mountain", he is detained in Detroit where Art Mullen questions him about the night Nick Augustine was killed. Sura tells Art that Sammy had mentioned a Kentucky lawman that was present the night Nick was killed, and that if he wants the full story, he should find Picker who is hiding under the radar with Wynn Duffy.

In "Shot All to Hell", Elias Marcos talks to Sura beside his car, telling him that he knows Sura was detained and gave information to the Marshals. Sura tells Marcos that he told them what he heard, that a Kentucky lawman was present the night Nick Augustine was murdered and he told them it was Picker. Marcos shoots Sura to death shortly afterwards.

Retrieved from "https://justified.fandom.com/wiki/Al_Sura?oldid=17803"
Community content is available under CC-BY-SA unless otherwise noted.