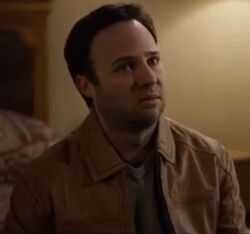 Name
Albert Fekus
Birthplace
Birthdate
Age
Status
Alive
Cause of Death
Affiliation
Officer at county jail (Formerly)
Actor
Danny Strong
Albert Fekus is a recurring character in the FX series Justified. Albert was a power hungry officer at the country jail who attempted to molest Ava Crowder and later framed her for stabbing him. He is portrayed by guest star Danny Strong.

In "Over the Mountain", Albert attempts to molest Ava before they are caught by Susan Crane. Albert yells at Ava to stop resisting and Ava claims she fell and grabbed Albert's arm. While he is outside smoking, Susan comes out and it is apparent she is aware Albert has been molesting female convicts before. She brutally beats Albert because he made the mistake of molesting Ava, who was protected inside.

In "Shot All to Hell", Albert enters into Ava and Sally's cell doing a bed search, where he finds a shiv under one of the mattresses. Ava realizes that Albert planted it there, and Albert stabs himself and cuts his forearm with the shiv before calling the guards. Sally also plays along with this, causing Ava to be sent to a state prison.

In "Weight", Albert is seen at a bar flirting with Teri and leaves with her, not noticing Boyd Crowder who is watching them from afar. Boyd has Albert held captive, wanting him to recant his statement against Ava. At knifepoint, Albert admits he cut himself and framed Ava because he was in love with her, and he didn't have the power to make her his. Boyd cuts him free and orders him to run off before he changes his mind.

In "Sounding", Wynn Duffy and Mike interrogate him in a hotel room, hoping to find out what really happened with Albert's "crisis of conscience" but he does not give up any information despite being continuously shocked with a cattle prod. After Duffy and Mike leave, Rachel Brooks and Tim Gutterson emerge from a nearby room, having watched the interrogation go down on a hidden camera inside of a smoke alarm. Rachel tells him that he is in the clear and Tim fist bumps him, saying that Uncle Sam thanks him for his cooperation.

Retrieved from "https://justified.fandom.com/wiki/Albert_Fekus?oldid=21432"
Community content is available under CC-BY-SA unless otherwise noted.