Edit
watch 01:36
We're Getting Mutants in the MCU - The Loop
Do you like this video?
Play Sound
Alberto Ruiz 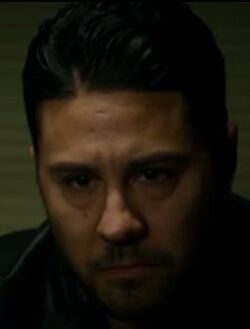 Alberto Ruiz is a recurring character in the fifth season of the FX series Justified. Ruiz was an associate of Yoon and a representative of the Mexican heroin deal that Boyd Crowder and Wynn Duffy received. He is portrayed by guest star Justin Huen.

In "Kill the Messenger", he is seen present at the meeting between Yoon, Boyd, Duffy and Ethan Picker.

In "Raw Deal", he meets with Johnny Crowder in Mexico and takes Johnny to Yoon's mansion when he says that he can outbid Boyd. After Johnny comes up with the money, Ruiz releases Boyd into his custody but stresses that Boyd must be killed across the border.

In "Whistle Past the Graveyard", he informs Boyd that Yoon has called an end to their business deal due to Boyd lying about there being no casualties, but Boyd manages to persuade him to call his boss and get him to keep the business deal going.

In "Starvation", he visits Duffy in his motorcoach, where Duffy lies and claims that he executed Boyd. Alberto exclaims that Yoon wants skin as confirmation and as they leave the trailer, Duffy volunteers to help them catch Daryl Crowe Jr. At the old barn in Loyal where Duffy and Boyd were supposed to send the Marshals, Daryl and the cartel to, Alberto catches a glimpse of Boyd, realizing that Duffy lied and that Boyd is still alive. Near the end of the episode, Alberto, Manolo and Manuel are seen holding Jimmy Tolan at gunpoint as he talks on the phone with Boyd.

In "Restitution", Boyd goes into his office at the bar to find Alberto, Manolo and a bound Jimmy in the back room. He pulls out his gun on Alberto and prepares to shoot him, until Manuel shows up behind him, holding a gun to his head. Alberto reveals after Manolo kills Jimmy that because Boyd lied on his promise about there being no bodies in Mexico, they now want to kill the men responsible and give Boyd a certain amount of time to track down Daryl (although Boyd edits Raylan's number to read Daryl and sends him text messages). They ultimately go to Ava's old house to meet with Daryl, although US Marshals Rachel Brooks and Tim Gutterson show up. A shootout ensues and Alberto is shot and killed by Tim.