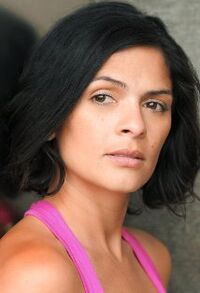 Alexandra Barreto - born on October 16, 1975 (1975-10-16) (age 46) in Staten Island, New York, USA - is an actress. She had a recurring role as Miami based assassin Pilar in the first and second seasons of the FX series Justified. She also starred in the series Pepper Dennis and has had recurring roles in American Family, The District and Resurrection Blvd.

Barreto was born in Staten Island, New York to a Puerto Rican father and an Italian mother. She has one brother and two sisters.

Barretto has been married to former Boy Meets World cast member Rider Strong since 2013. In January 2015, it was reported that Barretto had given birth to their first child, a son named Indigo "Indy" Baretto Strong back in December 2014.

Since appearing in Justified she has had roles in the series NCIS, the television feature OB/GY Anne and the shorts Dungeon Master and The Method.