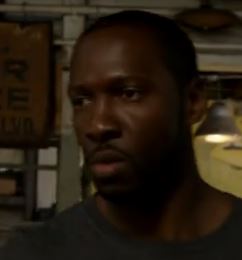 Ali is a recurring character in the fifth season of the FX series Justified. Ali was a henchman who was formerly working for Rodney Dunham until his loyalty was bought by Johnny Crowder. In "Wrong Roads", he is stabbed in the neck with a pencil by Dunham, and ultimately bleeds to death. He is portrayed by co-star Reggie Watkins.

In "Shot All to Hell", he is seen playing poker with Johnny, Roscoe and Jay where it is soon revealed that Johnny used his cut from their first drug robbery to buy the three men's loyalty, turning the tables on Dunham, who was preparing to give Johnny up to Boyd Crowder.

In "Kill the Messenger", he is seen holding Dunham at gunpoint during his conversation with Boyd where Dunham cryptically tips Boyd off that something isn't right.

In "Wrong Roads", Jay orders him to keep interrogating Dunham for information on Boyd's whereabouts. Dunham eventually confesses that Boyd is at Audrey's, but requests a pencil to draw the location for Ali. Dunham fatally stabs Ali in the neck with the pencil, but Ali manages to shoot Dunham in the stomach.

Retrieved from "https://justified.fandom.com/wiki/Ali?oldid=17840"
Community content is available under CC-BY-SA unless otherwise noted.