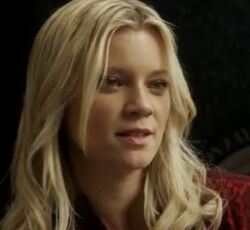 Not much is known about Alison's background.

In "The Kids Aren't All Right", Raylan bumps into her as he is leaving the police station. They exchange a bit of flirtatious banter back and forth, and later she is seen having wine with him at his new estate.

In "Good Intentions", Raylan and Alison are about to make love when a car alarm constantly going off is heard (which turns out to be Henry Granger Sr.). After Raylan defuses the situation, Alison tells him that she has to leave. Later, he confesses to her that a man was out there and it wasn't a car alarm on the fritz, and he believed it was a goon sent by Charles Monroe, the estate's owner. Alison identifies the man, and Raylan pays him a visit. Granger claims that Alison set him up by planting crystal meth in his house, taking his youngest son Henry Jr. away.

In "Over the Mountain", she is seen at her house with Raylan where she tells him a story about a boy chained to a radiator by his family, and his dad not wanting the boy to be taken by the government because he was his only family, despite the boy's abusive treatment.

In "Shot All to Hell", she chastises Raylan for using Kendal Crowe in his issues with the Crowe family, believing that he is trying to draw fire.

In "Kill the Messenger", Alison visits Wendy Crowe and Kendal at their new house for a check-in. On her way out, Danny barks at her and taunts her. She is then ran off the road by Danny as she leaves, watching as he barks and laughs. At the Marshal's office, she informs Raylan of what happened to her.

In "Raw Deal", Alison runs into Wendy on her way into Child Protection Services. Wendy asks her of things that Raylan likes, implying that she is planning to seduce Raylan, which Alison takes offense to. At a bar with Raylan, she tells him that she has been suspended for two weeks for misconduct involving her cases, due to Wendy talking with her boss.

In "Whistle Past the Graveyard", Raylan buys Alison a bikini and invites her to accompany him to Florida when he visits his daughter, although she is wary about being around Winona. At the end of the episode, Raylan informs her that her suspension has been lifted as Wendy kept her end of the deal and invites her again to Florida when he gets more money, but she breaks up with him.

In "Weight", Alison arrives back to her house to find Kendal eating pizza at the table, as he is hiding from Danny after his Mastiff, Chelsea, is hit by a car. Alison instead tips off Wendy to his location, where Kendal is angry with her for giving him up.

In "The Toll", Alison is in a hotel room packing her stuff with Art Mullen. As they go to leave, they are shot at by an unknown assailant, who hits Art with a bullet in the stomach. She is seen sleeping on a couch in his office when Raylan comes, where he tells her that she will have to stay under Marshal protection until the shooter is caught.

Retrieved from "https://justified.fandom.com/wiki/Alison_Brander?oldid=17608"
Community content is available under CC-BY-SA unless otherwise noted.