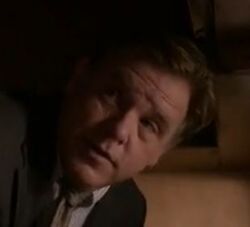 Arnold is a recurring character in the fourth season of the FX series Justified. Arnold is a client of Ellen May's, who has a fetish for furries. Arnold surprises Ellen May by donning a bear costume, but is shot several times by her when she panics, although he survives. He is also a member of the Clover Hillers, a rich group of businessmen who are responsible for Bo Crowder's success and want Boyd Crowder to murder Black Pike Mining owner Frank Browning. Arnold is portrayed by guest star Brian Howe.

Not much is known about Arnold's background, other than that he works as a Judge-Executive for the state of Kentucky.

In "Hole in the Wall", Arnold visits Ellen May at Audrey's, bringing her some drugs inside of a fake million dollar bill from Billy's church. Arnold dons a bear costume to surprise Ellen May, but is shot several times when she panics. Arnold survives the shooting.

In "Foot Chase", Ava visits his home in order to receive an invite to Napier's party. She attempts to blackmail him with exposing his infidelity to his wife, April. Arnold tells her to consider herself invited, and that he will handle Napier so that Boyd gets in as well.

In "Money Trap", he is revealed to be one of the Clover Hillers as he is seen with Sam Keener, Gerald Johns and Lee Paxton when they plot their assassination attempt against Frank Browning.

In "Outlaw", Arnold, Gerald, and Lee visit Boyd at the bar. Boyd informs the men that he did not kill Frank himself, and that he had a higher power strip the Clover Hillers of all their law contacts, removing their power. Boyd wants $100,000 from each of the men, as well as a Dairy Queen franchise.

In "The Hatchet Tour", he is blindfolded and taken into a back room of Audrey's by Ava. Upon taking the blindfold off, he finds Boyd standing in the doorway. Boyd questions him about a member of security that Arnold may have hired “up on the hill” in the ’80s.

Retrieved from "https://justified.fandom.com/wiki/Arnold?oldid=17570"
Community content is available under CC-BY-SA unless otherwise noted.