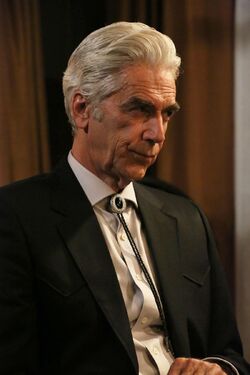 Avery Markham was a recurring character in the sixth season of the FX series Justified. Markham is a legendary Kentucky gangster and one of the main antagonists of the season. He is portrayed by guest star Sam Elliott.

Markham is described as a legendary Kentucky gangster who returns from exile with a private army and a large amount of cash from all the weed he grew in Colorado, determined to win back his empire and lost love, Katherine Hale. Markham plans to strongarm land from homeowners around Harlan in order to grow weed once it is legalized in Kentucky. However, Markham kills the homeowners that fail twice to take the offers to sell their properties.

Decades ago Avary Markham was top leader of Dixie Mafia organization in Kentucky until he went undergroud and left for Colorado. In Colorado he eventually moved to legal weed business and recruited many former special forces soldiers to his private army.

In "Cash Game", he is seen smoking pot with Katherine as they reminisce, and she shares her belief that an employee has been stealing from her. Markham suggests that if it was him, he would torture the person.

In "Noblesse Oblige", he visits Ava Crowder's home and talks to her, saying that there is no place for a woman in the criminal world unless she can act tougher than any man, otherwise she is just a token. He later threatens to kill Boyd Crowder if he ever catches him at The Portal again as the blackmail ledger that was stolen belonged to him and not Calhoun Schrier as originally thought.

In "The Trash and the Snake", Walker calls him to the Bennett property after Loretta McCready rejects his offer and US Marshals Raylan Givens and Tim Gutterson show up. Markham squares off against Raylan as the two trade threats to one another with Markham bringing up his knowledge of the Tommy Bucks shooting.

In "Sounding", Markham is aware that someone has been interfering with his plans to buy up properties for his weed with Walker suggesting it could be Raylan or Boyd as they have enough sway to convince homeowners to reject the deals. Markham remarks that Raylan and Boyd are two different animals who need two different methods to be taken care of.

In "Alive Day", Markham proposes to Katherine in their hotel room and while not saying yes, she does promise to consider it. Markham also talks to her and wants her to come clean about snitching on Grady (which she denies). He later learns about the murder of Calhoun when Raylan and Tim come to The Portal investigating it and become suspicious at Choo-Choo's sudden disappearance. Markham pep talks a reluctant Walker into killing Choo-Choo by telling him a military story due to Choo-Choo causing discord with the murder and Walker agrees to do when Choo-Choo has second thoughts about killing Caprice (the person who could identify Seabass and Choo-Choo at Calhoun's office)

In "The Hunt", Walker calls Markham and Seabass wanting an extraction as he was shot in the shoulder by Raylan during the shootout, lying and telling the two men to pick him up at a church in Corbin where he is held up. Seabass offers to go look for Walker, but Markham warns him that Walker is lying about his whereabouts and is going to make Seabass walk into a trap. Markham warns Seabass that Walker is burned and to not step in that fire, offering cash for Seabass' loyalty and promising that the only orders he will ever listen to again are his own. Seabass accepts the cash and walks away. At the Marshals office, he is detained during the manhunt for Walker where Art talks to him about the Grady Hale case, implying his belief that Markham was the snitch as both Grady and U.S. Attorney Simon Poole were killed but remarks it wouldn't make much sense for him to slow down Grady's case by killing Poole, then turn around and kill Grady so that he could be with Katherine if he was just going to leave Kentucky.

In "Dark as a Dungeon", Raylan finds Markham at the portal and makes an officer to give Markham his land if he helps him locate Walker. Raylan tells Markham that Boyd is the one who has been telling homeowners not to sell their properties and that they have a common enemy in Boyd with Walker being the man in the middle. Raylan suggests baiting Boyd into a trap with the promise of money and Markham goes onto a local radio show, offering a reward of $100,000 to anyone who can locate Walker.

In "Burned", Seabass shows up and holds Markham and Hale at gunpoint in their hotel room, demanding a "severance pay". Katherine offers to give Seabass the tennis bracelet that she had previously stolen from her purse, but instead shoots Seabass with a small handgun she has hidden inside of it. Katherine then shoots Seabass in the head to finish him off. Loretta upstages Markham during his speech and offers Harlan a more profitable solution to the weed business: That the landowners will not be forced to leave their properties and that they will hire locals for protection and farming, winning over the crowd. Markham then tells his hired gun Boon (who had previously threatened Loretta earlier) to find out if she has any next of kin. After Boyd's heist fails when the dynamite doesn't create a large enough blast, Markham and Raylan talk in the basement with Markham saying that he thought they were on the same side but now feels as if Raylan is just using him to get to Boyd with both men replying that they have to do what they have to do.

In "Trust", Raylan and Tim meet with Markham at a diner as Raylan tells him that he is going to call Katherine and tell her he is moving the money to Charlotte as he believes that Boyd has an inside man and that if Katherine doesn't tell Boyd, they can trust her. Markham does as Raylan asks and tells Katherine that he is moving the money to Charlotte, which she relays back to Boyd. Markham visits Loretta's greataunt Lilian in order to talk her into coercing Loretta to sell the Bennett property to her, but Lilian is well aware of his intentions when he begins asking if there were any other next of kin that could have taken Loretta in as she was in foster care. After her refusal, Markham orders Boon to shoot her multiple times. Boyd calls Markham and tells him that he has taken Katherine hostage and to bring the $10 million to a meeting point and that he will kill her if Markham doesn't call back, doesn't come alone or takes too long to find the meeting point. Markham holds up his end and gives Boyd the $10 million as Boyd tells him the truth that the robbery was all Katherine's idea as she blamed Markham for killing her husband. Katherine then turns to ask Markham if he is going to kill her as he stands by the car and contemplates.

In "Fugitive Number One", Katherine tells Markham that she just learned that Duffy was the snitch and is heading over to execute him, the two reconciling their love for one another after the betrayal as Markham sets off to get back their $10 million. Boon accompanies Markham to the jail when he forces Carl into finding out where his money is and executing Boyd soon after and Boon is ordered to kill Earl if Carl fails the mission and after learning that Carl was killed, Markham still orders Boon to carry out the hit on Earl as the deal is still ongoing. Raylan visits Markham at The Portal and tells him that he has Earl to testify against him for the attempted murder and that could put him away for a long time. Raylan tells him to lay off chasing after the money and Ava. Avery says he’s feeling at home and is putting down roots with his lady friend and says they’re going to own this town. Raylan says his lady friend is dead as of a half hour ago. He says it went pretty badly in a motor coach owned by Wynn Duffy. He tells Avery all this is on him and says that should guide him as he contemplates his next move and leaves as Avery sits in mourning.

In "Collateral", Markham visits the morgue and says his goodbyes to her corpse, saying that he loves her and that he tried to tell her that he would go after Duffy himself. Markham vows to reclaim his $10 million and gut Duffy from head to tail for her murder. Markham arrives to the barn where Loretta and her ex Derek Waters were hiding at and he promptly shoots and kills Derek. Markham reveals to Loretta the reason that Boon has been pressuring her all this time is so that she can reveal where Ava has been holding up with his money due to Loretta's connection to Boyd. Loretta tells him she does not know and he gives her 30 minutes to plead her case of why he shouldn't kill her. She offers him her partnership and exclaims her strong points, as she has grown up around marijuana and knows the business, as well as the people in Harlan.

In "The Promise", Markham asks Ava how she was able to get the money up the mountain on a sled by herself, as she reveals that her uncle Zachariah Randolph helped her and sends Boon (along with Loretta) to Compass Rock to find Zachariah as some of the money has been buried there. After learning that Zachariah is nowhere to be found, Markham threatens to blow Ava's brains out unless she tells him what happened on the other end of the phone call she received from Zachariah (who was really Boyd the whole time). Boyd shows up to the drying shed with Birch held hostage and the two men exchange shots at each other after Markham remarks that Boyd made a poor choice with his hostage and Boyd shoots Markham to death.