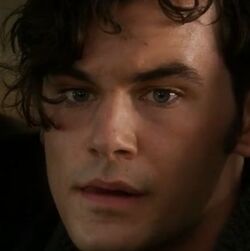 Benny is a recurring character in the fourth season of the FX series Justified. Benny is a teenager hired by Roz's step-father Josiah Cairn to retrieve a mysterious canvas bag from the inside of wall inside of Arlo Givens's house. Benny is portrayed by guest star Casey Brown.

Not much is known about Benny, other than the fact Roz and him "claim" to have killed twelve men the day before the events of Hole in the Wall took place.

In "Hole in the Wall", Benny and Roz break into Arlo's home and begin to bash holes into a dry wall. It appears that the two are just looking for copper wire to sell for a profit. The two flee the house when they see Constable Bob Sweeney pulling up outside. From a distance, they watch as Raylan Givens throws a canvas bag into a trunk, and they follow him to a hardware store. Roz is sent inside to flirt with Raylan long enough for Benny to steal the car. Raylan follows it to a scrapyard and finds Benny, Jody Adair, and Roz inside of the office. The three of them (along with a friend, Henry, who operates the scrapyard) are subdued through efforts from Bob and Raylan. Benny suggests taking Raylan up on his offer to skate on the car theft.

In "Foot Chase", Raylan drives up to Benny's home, finding him shooting at a sketch of an Indian man who is supposed to resemble Teddy. Raylan throws him to the group and tries to get him to call Roz, which he refuses to do so.

Retrieved from "https://justified.fandom.com/wiki/Benny?oldid=17571"
Community content is available under CC-BY-SA unless otherwise noted.