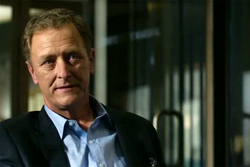 Name
Bill Nichols
Birthplace
Unknown
Birthdate
Unknown
Age
50s
Status
Deceased
Cause of Death
Shot in the head by Walter Vondas
Affiliation
US Marshals
Actor
Michael Harding
Bill Nichols was a supporting character in the FX series Justified Season 3 episode, "Cut Ties". Nichols was a US Marshal who was in charge of the WitSec program and was in charge of watching over 3 people in the program. Nichols is murdered by his WitSec protectee, Walter Vondas aka Terry Powe in an attempt to sell out the other locations of Nichols's WitSec clients to get the $2 million to pay the entry fee to get back in the game with Joe Delahunt. Nichols was portrayed by guest star Michael Harding.

Nichols is a US Marshal who is in charge of the WitSec program. It does appear that he and Art Mullen have a history together from their chat in Art's office.

Nichols only appearance is the episode ("Cut Ties"). Nichols visits his old friend and fellow US Marshal Art Mullen. The two have a chat and begin to catch up before Nichols leaves to go to one of his WitSec protectee's house, Mary Archer. It is revealed that she is in the WitSec program to be protected from a man named Carlos Salazar (it is not known what she did.) Nichols tells her that it gets easier once she testifies, because it will not be hanging over her. Once Nichols leaves her house, Vondas begins to follow Bill to a nearby store. Vondas begins to play a smart phone game while he waits for Nichols, who suddenly shows up at the drivers window. "You better have one helluva story," Bill says. Vondas acts glad to see Nichols then tells him to walk around to the back of his SUV because he has something to show him. Vondas then shoots Nichols in the leg, saying "sorry Bill, but you know how it is."

It is later revealed that Nichols body had been found outside of town, with two bullet wounds to the legs, as well as a shot to the head. Goodall concludes that Nichols was tortured into giving up information about the whereabouts of his clients before being killed

Retrieved from "https://justified.fandom.com/wiki/Bill_Nichols?oldid=17698"
Community content is available under CC-BY-SA unless otherwise noted.