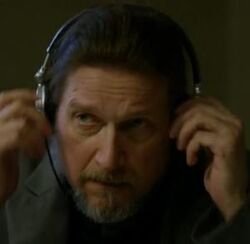 Billy "Wildman" Geist is a recurring character in the FX series Justified. He is Ava's lawyer, representing her during her incarceration in the Harlan County Jail and the Kentucky State Women's Prison. He is portrayed by guest star Don McManus.

In "A Murder of Crowes", "The Kids Aren't All Right", and "Good Intentions", Billy is seen when Boyd and Ava are talking in the county jail, and he is listening to classical music through his headphones, which Ava and Boyd threaten him to put back on his head whenever he believes they need to talk to him and he removes them.

In "Shot All to Hell", Geist informs Boyd and Ava that the judge is dropping the now crumbling case against Ava due to the murder of Mooney and the suicide of Paxton. However, later that day, Geist goes to the bar and tells Boyd that he has bad news.

In "Kill the Messenger", Geist visits Ava at the prison to give her a message from Boyd. Geist informs her that Albert Fekus has gone out of state and there is no proof that Ava didn't shank Albert as the security cameras in that area were turned off. Ava pleads for Geist to help her.

In "Restitution", Geist calls Boyd with good news: Ava has been released from prison as both Albert and Sally (Ava's old bunkmate at the Harlan county jail) both recanted their statements. It's unknown whether or not Geist is aware that Ava was released by Raylan to help out the Marshals with their RICO case to bring down Boyd.

In "Dark as a Dungeon", he arrives at Ava's house after the situation with Walker has been diffused, claiming that Ava and Boyd were in fear for their lives and were trying to find a way to contact authorities.