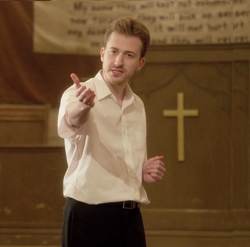 Billy St. Cyr is a recurring character in the fourth season of Justified. Billy was a popular preacher who has set up the Last Chance Salvation church. Billy's conversions are hurting Boyd Crowder's Oxy Business as many of his congregation are former drug users. In "Truth and Consequences", Preacher Billy is killed during a sermon when a rattlesnake bites him in the arm as he is holding it up in the air, he then collapses to his death. Billy is portrayed by guest star Joseph Mazzello.

Billy has a sister named Cassie. Billy and Cassie's father died from a venomous snake bite. Billy was bitten twice by his own pet snake named Mabel, but survived.

In "Hole in the Wall", Billy's arrival in Harlan is discussed before he is seen. Million dollar bills advertising his church are handed out around town. Convert and former drug dealer Hiram tells Boyd Crowder that Billy's sermons are hurting his Oxy business, as his customers are converting to Christianity.

Billy gives a sermon at his Last Chance Salvation church to an eager congregation. He holds his pet snake, Mabel, throughout and tells the story of his fathers death. Crowder prostitute Ellen May is among the churchgoers.

In "Where's Waldo?", Ellen May returns to the church in search of Rev. Billy. "I just wanted to say how much I appreciate you taking an interest in me, but I don't think I can be part of your church," she cries. "I've done some terrible things." Billy explains that no one is beyond saving and he will shame those who say otherwise. Billy later baptizes Ellen May in front of his churchgoers. Not long after the baptism, Colton Rhodes, Boyd, and Jimmy show up. Billy believes that Boyd is there to save himself, and knows of Boyd's reputation in Harlan. Boyd explains that he once stood where Billy stood, and wonders aloud if the reverend might be a false prophet here to exploit the citizens. So Billy announces that, from this moment on, no member of the church is to give one single cent to the ministry. All of the congregation stands and applauds, except for Cassie, who seems to be angered with her brother's decision despite appearing to be on a mission to save souls like he is. Boyd takes notice of this on his way out.

In "Truth and Consequences", Boyd once again visits the church during a sermon holding a metal box with a venomous snake collected from a nearby ravine. Boyd refers to Billy's snakes that attacked Jimmy as "dark angels", and forces Cassie to come clean that she has been milking Billy's snakes of their venom the entire time, ever since their father's death. Shamed in front of his entire congregation, an angered Billy decides to save face by handling the snake, despite the protests of both Boyd and Cassie. The snake bites Billy, who collapses as Cassie screams for someone to call an ambulance as he dies.

"Are you prepared to come forth and be saved?"  -Billy St. Cyr to Boyd Crowder

"Did you all come to watch the hillbilly with the snake, or did you come to be saved?"  -Billy St. Cyr to his congregation

"Mr. Crowder, you may have started this game, but you do not get to say when it is over."  -Billy St. Cyr to Boyd Crowder

"It seems only appropriate that as I speak of devils, Boyd Crowder appears in our midst."  -Billy St. Cyr adressing his congregation

Retrieved from "https://justified.fandom.com/wiki/Billy_St._Cyr?oldid=17880"
Community content is available under CC-BY-SA unless otherwise noted.