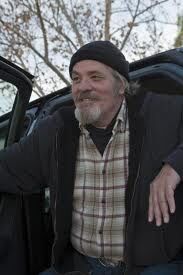 Bo Crowder was a recurring character and one of the main antagonists in the first season of the FX series Justified. Bo is the father of Boyd Crowder and Bowman Crowder, the uncle of Johnny Crowder, as well as a frequent associate of Arlo Givens. Due to Hunter Mosley's incarceration, all of the criminals Mosley arrested are released, including Bo in "Blowback". After Bo's release, he begins to get back into his position as the meth kingpin of Harlan. Boyd blows up a shipment of pseudophedrine sent to him by Gio Reyes in "Fathers and Sons", prompting Bo to call a hit on Raylan since the Miami Drug Cartel wants him dead. Bo ends up being shot and killed by an unknown sniper outside of the cabin where Ava is held in the episode "Bulletville", making him the third Crowder family member chronologically in the series to be killed, following his son Bowman and relative Henry. Bo is portrayed by guest star M.C. Gainey.

Bo Crowder is as mean as they come. Before his incarceration He ran a meth lab in Harlan County and has ties with the Miami Drug Cartel, an association that wants Raylan's blood over the murder of Tommy Bucks. Bo was shaking down the cartel for more money so the cartel thought of a way to get rid of Bo and cut the price in half. They approached Hunter Mosley and offered him Henry Crowder in exchange for locking Bo up and running the drugs for half the price. Hunter agreed and set Bo up for eight years on a drug trafficking charge. While he was on the inside he directed Arlo Givens and Bowman Crowder to run his protection business until he got out. Unfortunately Arlo ran the business into the ground and Bo was out $100,000.

In "Blind Spot", Bo appears at the very end of the episode, coming to Boyd's rescue after he gets himself in a scuffle in prison.

Due to Hunter's arrest in the previous episode he appears in "Blowback" at a diner Ava Crowder is eating at and begins to harass her, saying that she is his responsibility and making several off-color "pie" remarks until Raylan Givens shows up and orders him out of the diner. He later appears to pick up Boyd after his release from prison.

In "Veterans", he is seen with Johnny at the bar, talking to the scared pair of meth cookers who come to Bo seeking protection to make sure their lab doesn't blow up again (This all happened in the previous episode "The Hammer", Boyd had blown up their meth lab and accidentally killed their meth cooker Gil). Bo, thinking Boyd did this for him, paid a visit to Boyd's camp, takes his son aside and hands him an envelope full of cash. Bo explains that it's his cut of the protection money which Boyd promptly returns to his father. Boyd explains its against his religion but Bo leaves the money on a rock before storming away. After that Bo has Hestler and Johnny drive with the meth distributors and has them killed to make way for their friends in Miami. Bo then pays Arlo a visit and demands his money from the protection service which he ran to the ground. Arlo says he doesn't have it and Bo warns that he has until tomorrow to come up with the money. When he doesn't, Bo sends some people to kill Arlo and Helen, but they fail.

In "Fathers and Sons", he flies out to Miami and talks with Gio Reyes at the Miami Glades country club over their business arrangements. Gio introduces Bo to Pilar and Ernesto and explains that they will deliver $2 million worth of ephedrine and he will cook it in Harlan and repay Gio's $2 million over a period of six months. Gio then threatens Bo with the consequences of what will happen if he makes a mistake. Bo rebukes this by saying he already understands and to think that he didn't was an insult. They then talk about how a certain U.S. Marshal (Raylan Givens) is a thorn in both of their sides. They shake hand on a deal where Bo gets the pseudoephedrine and pays Gio back $2 million over six months. Bo then meets with a real estate agent named Martha Simms with Johnny, Hestler, and Ronson to set up their meth cooking operation in a warehouse. While Johnny is distracting Martha, Bo finalizes the deal by making sure Ronson has everything he needs to make the meth. He is later seen listening to his son preach about how wrong the meth business is and condemns him right in Bo's face. After the sermon is done Bo subtlety threatens Boyd to back off but Boyd just continues to speak the word of the lord and walks away. Later at Johnny's bar, Bo is at a meeting to organize the whores until Ava bursts in and threatens Bo to back off of her or she will kill another Crowder. A little while later Bo gets another visitor in the form of Arlo while he is with Hestler. Arlo then warns Bo that he is wearing a wire and offers Bo a deal where Bo pays Arlo and in exchange Arlo keeps his mouth shut and only feeds the feds false information. Bo then sets up a meeting with Arlo at Pine Mountains where there is to be no wire,

In "Bulletville", Bo is seen telling his men, Heckle and Jeckle, to follow Arlo when Johnny comes in. Bo introduces him to the drivers and lets them tell the story of how the shipment was blown up, which all indicated that it was Boyd. After they were done Bo has Hestler lock them in a storage closet to keep them from telling their uncle about what happened. After that Bo takes the rest of his men to Boyd's camp in the woods and rounds everyone up at gunpoint. He then orders Johnny to beat Boyd until he says stop which Johnny does, afterwards Bo asks Boyd where his guns are and Boyd doesn't respond. After Johnny punches Boyd again, one of the flock members tells Bo its under the fire and tells them to start digging and orders Boyd to leave. He explains that they will be sent away for parole violations but Boyd refuses to leave them. Bo then threatens to kill one of his men unless he leaves which Boyd does this time and Bo shouts that everything that happens is on Boyd. After he has left, Bo then kills every member of Boyd's flock and heads back to the bar where he releases Ernesto and Pilar and tells them that Boyd is out of business. He proceeds to tell them that he plans on paying back every cent he owes and he's going to give them the one thing Gio wants more than money: Raylan Givens. He leaves to go meet Arlo at Raylan's motel room and offers him a deal: Kill his son and he will have Bo's trust again. Bo then proceeds to Ava's house with Johnny and Hestler and proceed to kidnap and kill her for killing Bowman. After Hestler takes her Bo points a shotgun at Johnny and shoots him for tipping off Boyd about the shipment coming in and people will think Ava killed him and went on the run to avoid prison. He then calls Raylan on Ava's phone and when he hears the Marshal's voice he realizes his men failed and tells him to show up at his cabin alone or Ava dies. Raylan shows up and has his man Rufus take both his guns and prepares to kill him. He then hears a shot come from the cabin and turns away while Raylan takes advantage of the situation and grabs Rufus' gun and shots him with it. Bo is then confronted at gunpoint by Boyd who seeks revenge for the death of his men. But before he can get the chance a sniper shoots Bo in the chest, killing him.

Bo's lifeless body can be seen at the start of the Season 2 premiere episode "The Moonshine War".