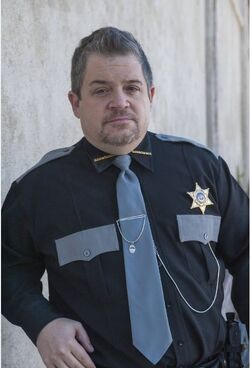 Bob Sweeney is a recurring character in the FX series Justified. Bob is introduced as a Constable for Harlan, Kentucky who assists Raylan Givens in a task to retrieve his car back from two wire-stripping teenagers. He is portrayed by guest star Patton Oswalt.

Bob and Raylan go way back, all the way to an old lake trip they took while they were seniors. While Bob was a High School student in Florida, he hit a fellow student named Ollie Camp with a hammer during shop class. Bob was also in charge of watching over Arlo Givens's house for two months while he is away in prison.

In "Hole in the Wall", Bob comes across the Givens house and spots the two teenagers (Roz and Benny) responsible for vandalizing Arlo's house running down the street. He calls Raylan, who investigates the holes in the wall even further and finds a mysterious canvas bag (along with a driver's license issued to "Waldo Truth" inside). After Raylan's car is stolen, Raylan calls Bob to pick him up, and they rush off to the scrapyard when Raylan remembers that he left Jody in the trunk of the car. Bob is left in charge of watching over the scrap yard operator, Henry, while Raylan investigates the office to find Roz, Benny, and Jody waiting for him. Bob is overpowered by Henry, but saves Raylan's life when he stabs Roz in the foot while she is being held hostage by Jody, allowing Raylan to knock Jody out with a rim. Bob realizes that Raylan only needed his help because he was doing an off-the-book task for extra money on the side.

In "Kin", Bob easily re-captures Roz due to her hurt foot when she attempts to escape custody. Bob reveals that she tried to offer him a blow job in order to be released. Raylan goes into Bob's trunk and takes out of a photograph of his mom Frances and her cousin Mary. Bob warns Raylan about the hills because they eat people.

In "The Hatchet Tour", Bob engages in a shootout with Lee Paxton and Gerald Johns after they make fun of him when he attempts to question them. Raylan shows up and resolves the issue. While in the house, Raylan learns from Bob that Shelby took the fall for Hunter when Hunter went to look for Henry Crowder so that Hunter could retain his job as Sheriff, and that it was around the same time that Shelby was in mine security. This crucial clue helps Raylan realizes that Shelby is indeed Drew Thompson and that Hunter was protecting him.

In "Decoy", Bob responds to the motion detector that went off at Arlo's house. Bob, however, is taken hostage by Augustine's henchman Yolo, who was also arriving at the house to look for Drew. Yolo, realizing Bob had contacted Raylan, brutally assaults Bob in order to learn where Drew is being held. Bob eventually plays possum on the floor, stabbing Yolo in the leg when he comes closer. The two men struggle as Yolo crawls towards his gun, but is shot and killed by Bob. Raylan brings Bob to the high school with him, where he waits beside the door of the Principal's office with two guns to shoot whoever comes in when Boyd Crowder and Picker are outside. He is also responsible for Drew escaping Harlan when he suggests the idea of traveling by coal train.

In "Sounding", Raylan calls him and requests his help in finding Ava, who has gone missing. Bob tracks her and Errol from Noble's to a local hardware store where Raylan tells him to get Errol outside of the store and he will sneak in to get Ava out. Bob fails to get Errol out of the store, causing a confrontation which results in Errol being tasered by Bob and knocked unconscious.

In "Collateral", Bob calls Raylan to inform him about the BOLO out for him and notices that his police cruiser has gone missing (being stolen by Raylan) and he manages to track Raylan's location in the mountains, where he arrests Ava and finds the $10 million she is in possession of. Bob ties Ava up in his car but hears the gunshots of Boyd killing Hagan and leaves to pursue, but is shot in the stomach and shoulder by Boyd and found injured by Raylan who manages to take him to the hospital.

Retrieved from "https://justified.fandom.com/wiki/Bob_Sweeney?oldid=22130"
Community content is available under CC-BY-SA unless otherwise noted.