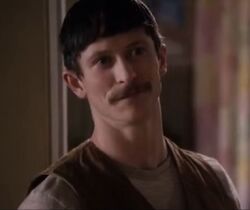 Boon was a recurring character in the sixth season of the FX series Justified. He is portrayed by Jonathan Tucker.

Boon is a hired gun working for Avery Markham.

In "Burned", he barges into Loretta McCready's house and vaguely threatens her by showing off his quick-draw skill and noticing a dead rattlesnake with its head shot off, saying to Loretta that "whoever shot that snake is one deranged and possibly dangerous individual. So if you’d made any enemies lately, I’d highly advise you to make peace by any and all means necessary, just so they don’t send this idiot back here again." He is later seen at Markham's party, once again talking to Loretta and also Raylan Givens and after Loretta badmouths Markham and Katherine Hale and the party and upstages his plan to buy up properties around Harlan, Markham orders Boon to find out if Loretta has any next of kin.

In "Trust", he is seen present with his boss in the diner when Raylan and Tim show up, where he begins to talk to Raylan, saying that he has thought about his comment on the movie cowboy and asks if he has ever came across anyone that wasn't macho that wore a hat and that they should disabuse the guy of that notion. When Loretta's greataunt Lilian refuses to coerce Loretta into giving up the Bennett property, Boon shoots her multiple times under Markham's orders. Boon later revisits the very same diner and torments the waiter, Heath, paying him $100 for his hat and ultimately threatening him for it, pouring out his coffee on the floor and saying that he is a bad waiter and also harassing another patron Maya to give him anything valuable on her as he doesn't want to leave empty handed.

In "Fugitive Number One", Loretta gets into her car and finds Boon in the backseat, who continues to intimidate her into joining Markham's side as he has a lot more than the amount of Bennett money that Loretta is still in possession of and promises the offer of protection so that nothing happens to her and she coldly shoots the offer down. Boon remarks that she has a fire in her belly, but not to let it burn her brain. Boon accompanies Markham to the jail when he forces Carl into finding out where his money is and executing Boyd soon after and Boon is ordered to kill Earl if Carl fails the mission and after learning that Carl was killed, Markham still orders Boon to carry out the hit on Earl as the deal is still ongoing.

In "Collateral",  Loretta and Derek hide out inside of a barn when they are found by Boon, who continues to intimidate and harass Loretta and enters a standoff with Derek, who Boon shoots in the shoulder when Derek tries to pull on him. Boon is then present when Markham arrives to finish off Derek and accepting Loretta's proposal of a business deal between the two.

In "The Promise", Loretta accompanies Boon when he sets out to Compass Rock to find Zachariah Randolph and the other $9 million of Markham's money that is missing. As Raylan drives to Lexington with Ava, Boon rear ends him in his truck and tells Raylan that he has been following him since he left the drying shed and has saved Raylan the trouble of looking for him. Both men draw their guns and fire, but Raylan gets the killshot while Boon only manages to graze Raylan's head. Boon is still alive, carefully watching to see if Raylan is dead and reaches over for his gun to finish the job, but Loretta steps on his wrist to protect Raylan from being killed and Boon dies.

Retrieved from "https://justified.fandom.com/wiki/Boon?oldid=22218"
Community content is available under CC-BY-SA unless otherwise noted.