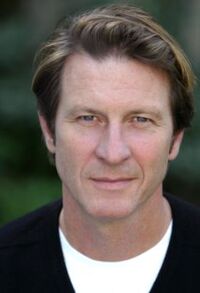 Brett Cullen - born Peter Brett Cullen on August 28, 1956 (1956-08-28) (age 65) in Houston, Texas, USA - is an American actor who co-stars as Greg Davis in the FX series Justified first season episode "The Collection", he's best known as the Corrupt Thomas Wayne in the 2019 Controversial Film The Joker.

Cullen was born Peter Brett Cullen on August 28, 1956 (1956-08-28) (age 65) in Houston, Texas, USA, the son of Lucien Hugh Cullen, an oil industry executive, and Catherine Cullen. He graduated from Madison High School in Houston in 1974. Cullen graduated from the University of Houston, giving great credit to his highly acclaimed acting mentor and University of Houston professor, Cecil Pickett, who also mentored such Houston born actors as Dennis Quaid, Randy Quaid, & Brent Spiner among others. Cullen and Dennis Quaid's close friendship to this day dates back to the 1970s and it is Cullen who introduced Dennis Quaid to his current wife, Kimberly Buffington at a dinner in Austin, Texas.

In 1996 he appeared in the television feature Shattered Mind. In 1997 he appeared in the series Orleans, Suddenly Susan, Arli$$, Ally McBeal and the cartoon The Incredible Hulk. He had roles in the television features Something Borrowed, Something Blue, Perfect Body and The Hired Heart. He also appeared in the films The Killing Jar and Levitation. In 1998 he appeared in an episode of The Outer Limits, three episodes of From the Earth to the Moon, seven episodes of The Simple Life and starred in Legacy. Cullen was the lead actor as Ned Logan in the short-lived Legacy, which lasted for just one season (1998–1999). He played astronaut Dave Scott (commander of Apollo 15) in the HBO mini-series From the Earth to the Moon working with Justified show runner Graham Yost who was a writer and producer for the project.

In 2000 he had roles in the television feature The Expendables and the film The Replacements. In 2001 he had roles in Family Law, Once and Again and Walker, Texas Ranger and the television feature On Golden Pond. In 2002 he appeared in an episode of Without a Trace and the television feature Nancy Drew. 2003 saw parts in the films National Security and Learning Curves and the series Cold Case. In 2004 he appeared in the television features Pixel Perfect, Deceit, NTSB: The Crash of Flight 323, Life on Liberty Street and Suburban Madness and the series The Mountain and Desperate Housewives. He played John 'Whit' Whitman in The Mountain for four episodes. He played Detective Burnett in two episodes of the first season of Desperate Housewives. In 2005 he appeared in single episodes of CSI: Miami, Lost and Monk and had a recurring role in The West Wing. On the seventh season of The West Wing Cullen played Ray Sullivan, a fictional governor of West Virginia and the Republican nominee for Vice President in five episodes. On Lost he guest starred as Goodwin Stanhope, a member of "The Others" faction in the second season episode "The Other 48 Days".

In 2006 he had roles in the television feature Faceless, the series Lost, NCIS, Pepper Dennis, Ghost Whisperer and Ugly Betty and the film Gridiron Gang. He reprised his role in Lost for the third season episode "A Tale of Two Cities". In 2007 he appeared in the films The Life Before Her Eyes and Ghost Rider and the series Lost, Private Practice, Burn Notice and Friday Night Lights. In American football drama series Friday Night Lights he played an estranged father to one of the players (Tim Riggins played by Taylor Kitsch) in four episodes of the first season. He reprised his role in Lost for the fourth season episode "One of Us". In 2008 he appeared in a fourth episode of Lost, an episode of The Mentalist and the films The Burning Plain and The Brothel. In 2009 he had roles in the series Damages and Three Rivers and the films Reunion and Killing Dinner. He had a recurring role in the second season of Damages as Wayne Sutry. Also in 2009, he began a recurring role in the ABC Family television series Make It or Break It.

In 2010 he co-starred as Greg Davis in the FX series Justified first season episode "The Collection". He also had roles in the series Lone Star, The Gates and 90210 and the films Crooked Lane, The Runaways and Skateland.

In 2011 he appeared in the series Person of Interest and Castle, the television feature Hallelujah and the films Puncture, Monte Carlo and Beneath the Darkness.

In 2016 he had a Recurring Role in Netflix's Narcos in wich A.J. Buckley appeared before and another recurring role in The Blacklist in 2019.