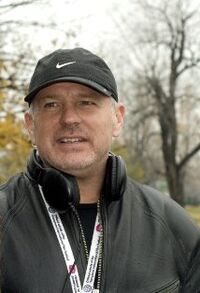 Brian Goodman is an American actor who guest stars as Joe in the FX series Justified first season episode "Long in the Tooth". He wrote, directed and starred in the film What Doesn't Kill You. He has also had recurring roles in the series Rizzoli & Isles, Line of Fire and Lost. He appeared in Boomtown, which was created by Justified showrunner Graham Yost.

Goodman dropped out of school aged 12. He earned money as a drug dealer and was eventually imprisoned for his crimes. He was married before his incarceration. He decided to become an actor when he saw the film Brian's Song while in prison. When he left prison he earned money by robbing other drug dealers.

In 2002 he appeared in Boomtown, which starred Wahlberg and was created by Justified show runner Graham Yost. He also appeared in the Steven Spielberg film Catch Me If You Can. In 2003 he appeared in two episodes of the second season of 24. He also began a recurring role in Line of Fire which lasted until 2004 and spanned thirteen episodes. Also in 2004 he had a role in the television feature Capital City and the series NYPD Blue.

In 2010 he guest starred as Joe, a hitman for Miami organized crime, in the FX series Justified first season episode "Long in the Tooth". He also had roles in the series NCIS: Los Angeles, CSI: NY, In Plain Sight, Three Rivers, Drop Dead Diva and Lie to Me. He also began a recurring role in the series Rizzoli & Isles as Lieutenant Sean Cavanaugh. In 2011 he also appeared in the FX crime drama Sons of Anarchy in the fourth season episode "Una Venta" as Huff, a member of the titular motorcycle club.