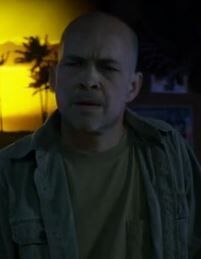 Caleb is a recurring character in the fifth season of the FX series Justified. He is a bartender who formerly worked at Boyd Crowder's bar, quitting after Daryl Crowe Jr. shot him in the leg. He is portrayed by co-star James Logan.

In "Wrong Roads", he is first seen denying any knowledge of who Boyd is when Rowena visits, and seen later when he is interrogated by Roscoe and Jay when they want to find out where Boyd is. He is found by Raylan Givens and DEA Agent Alex Miller, and tells them that he told the brothers they could find Boyd at Audrey's, and they depart, leaving Caleb tied up.

In "Starvation", he and Carl go into Boyd's bar to find Daryl Crowe Jr. holding guns at them, demanding to know where Boyd's heroin is at. Both men initially try playing dumb, but Daryl shoots Caleb in the leg and gets the information out of Carl. Shortly thereafter, Caleb quits.

Retrieved from "https://justified.fandom.com/wiki/Caleb?oldid=18197"
Community content is available under CC-BY-SA unless otherwise noted.