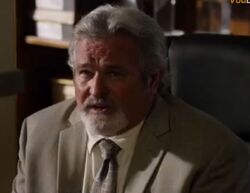 Calhoun Schrier is a recurring character in the sixth season of the FX series Justified. He is portrayed by guest star Brad Leland.

Schrier is a real estate agent who works alongside Ty Walker in his scheme to acquire various properties around Harlan.

In "Cash Game", Raylan Givens visits him at his office in order to question him about the box at the bank that had been robbed and he is blackmailed by Boyd Crowder who is in possession of his blackmail ledger. Later that night, Raylan visits him again and reveals his knowledge about the ledger and Calhoun's prostitute, Caprice, fills Raylan in on everything having to do with the ledger.

In "The Trash and the Snake", Raylan and Tim visit him to question him about the ledger, learning that they are the the holders of various properties that Avery Markham has his eye on buying in order to sell his weed in Harlan.

In "Sounding", Walker has Seabass and Choo-Choo interrogate him for information after learning that someone has been interfering with their plans to buy up properties in Kentucky. Calhoun claims to not know anything and is killed when Choo-Choo punches him in the head after failing to give him a little tap per Seabass's orders.

Retrieved from "https://justified.fandom.com/wiki/Calhoun_Schrier?oldid=18976"
Community content is available under CC-BY-SA unless otherwise noted.