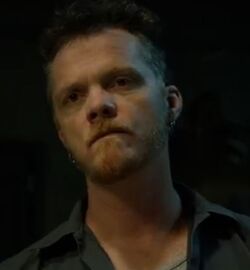 Carl Lennon was a recurring character in the  FX series Justified. Carl was the one of the new members of Boyd's criminal enterprise and the older brother of Earl. Carl is portrayed by guest star Justin Welborn.

In "A Murder of Crowes", he snipes down Detroit associates that attempt to rip off Boyd on the bridge.

In "The Kids Aren't All Right", he and Wade have an argument over their money scheme, which is overheard by Dewey Crowe. Wade covers both men by saying Carl was expressing his disappointment over one of the prostitutes Dewy fired.

In "Good Intentions", Boyd sends him out to find a prostitute nicknamed "Candy" at three possible locations he suggested. He comes back in with Candy in a large box.

In "Over the Mountain", Carl and Boyd track down Johnny and find him shaking hands with Rodney Dunham.

In "Kill the Messenger", Dewey Crowe and Danny Crowe show up at the bar looking for Boyd. Carl warns both men that they are going to step off a mighty high ledge messing with Boyd, before headbutting Danny. Despite putting up a good fight, he's subdued by the two cousins who decide to use Carl as a ransom to get the money from Boyd. However, Raylan Givens and Rachel Brooks show up at the cabin. Carl lies to the Marshals, claiming that he and Danny are S&M lovers and that there wasn't a kidnapping situation going on. Later, Carl accompanies Boyd when they assault Gunnar Swift over his sister, Gretchen, jumping Ava in prison.

In "Whistle Past the Graveyard", Carl is mostly seen accompanying Daryl, Danny, Dewey, Jimmy and Boyd smuggle the heroin across the Mexican border.

In "Wrong Roads", Carl is seen in Texas prying open a crate of fish in order to retrieve blocks of heroin. Carl refuses to allow Dewey to ride back to Kentucky with him due to Dewey's body odor.

In "The Toll", he is briefly seen with Jimmy as Boyd wants them to hide the heroin somewhere that God couldn't even find it before his meeting with Duffy.

In "Starvation", he and Caleb go into Boyd's bar to find Daryl holding guns at them, demanding to know where Boyd's heroin is at. Both men initially try playing dumb, but Daryl shoots Caleb in the leg and gets the information out of Carl, who tells Daryl that the heroin is at the old barn in Loyal by the railroad tracks.

In "Fate's Right Hand", Carl is mostly seen around the bar with Boyd and is seen being frustrated with the deposit box from the bank robbery only containing a ledger and some documents rather than money. Carl is distraught over Jimmy's death, but moves on, saying he was "a great friend."

In "Noblesse Oblige", he is seen at the bar, freaking out when Ty Walker visits as now none of them can do recon at the pizza parlor as he knows what they all look like. Later, he talks Earl into sticking around when he begins to have second thoughts about working with Boyd.

In "Sounding", he is revealed to be going door-to-door threatening homeowners at gunpoint so that they do not sell their properties to Avery Markham and his men. Carl (along with Earl and The Pig) later accompany Boyd and Zachariah Randolph in order to get inside of an old mineshaft that dead ends 187 yard from the vault, but trigger an explosion due to the sparks from a buzz saw, although nobody is killed.

In "Alive Day", he is present with The Pig, Zachariah and Boyd as they make their way through the mineshaft to clear it.

In "The Hunt", he is seen with Zachariah in the mine when they discuss Pig's death. Carl wants to explain the situation to Boyd, but Zachariah tells him that back in the day if a fellow miner was killed, the right thing to do was to visit the family (as Zachariah does not want Boyd to know his true motives). Carl instead angrily tells Zachariah that he is going to do what he wants and asks if that's okay with him.

In "Dark as a Dungeon", Carl finds Boyd and tells him that Zachariah is still down in the mines and wants to see him right away to tell him about what happened with The Pig.

In "Burned", Carl is seen down in the mines with Zachariah and Boyd as they plan to blow up the floor to the basement and retrieve the vault during Markham's party. Carl rushes to aid Boyd when he hears him screaming for help after Zachariah chains him up by his ankle and leaves him to die as the dynamite fuse continues to shorten.

In "Trust", Carl and Boyd prepare to rob an armored truck to steal Markham's $10 million before he can move it to Charlotte. As Carl packs up guns for the robbery, Ava asks him if Zachariah could have survived the mine explosion, but he thinks that there's no way that Zachariah could have lived because he may have got turned around in the explosion. Carl and Earl ride together to pursue the truck under Boyd's orders, only to end up arrested due to the trap set by the Marshals.

In "Fugitive Number One", Markham and Boon visit Carl and Earl in jail and tell them that they know that Boyd set them up for the fall while he went after the actual money. Markham forces Carl to find out where the money is and execute Boyd afterwards by threatening to have Boon shoot Earl if Carl fails the task. At the hospital, Carl pistol whips the cop accompanying him into unconsciousness and holds the gun at Boyd, demanding to know where the cash is. Boyd figures out that Markham is the one threatening to kill Earl and tells Carl to let him loose and they'll go after Markham together. Boyd, donned in Stiles' uniform, remarks that they will need to create some chaos to get out unnoticed and promptly shoots Carl and kills him.