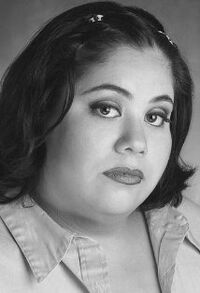 Carla Jimenez - born May 14, 1978 (1978-05-14) (age 43) in Westwood, California, USA - is an actress who guest stars as Mrs. Pena in the FX series Justified first season episode "Long in the Tooth". She has also appeared in the series ER, Malcolm in the Middle, Wanted, The Shield, My Name is Earl, CSI, Entourage, Dexter, Lincoln Heights, Better Off Ted, FX crime drama Sons of Anarchy, Desperate Housewives and Raising Hope. She has had roles in the films Nacho Libre, Lady in the Water, Miss March and Accepted.

Retrieved from "https://justified.fandom.com/wiki/Carla_Jimenez?oldid=10625"
Community content is available under CC-BY-SA unless otherwise noted.