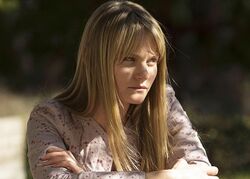 Cassie St. Cyr is a recurring character in the fourth season of the FX series Justified. She is the sister of new and popular preacher Billy St. Cyr. She is portrayed by guest star Lindsay Pulsipher.

Not much is known about Cassie, other than the fact her and Billy's father was killed from the bite of a venomous snake.

In "Hole in the Wall", she is present during Billy's sermon.

In "Where's Waldo?", she is seen greeting and talking to Ellen May, who wants to speak to Billy. Later, she is present at Billy's congregation when Boyd Crowder shows up and has a bit of a religious standoff with Billy. Boyd explains that he once stood where Billy stood, and wonders aloud if the reverend might be a false prophet here to exploit the citizens. So Billy announces that, from this moment on, no member of the church is to give one single cent to the ministry. While the rest of the congregation stands and applauds, Cassie seems more angered at his decision, despite being on a mission to save souls like he is.

In "Truth and Consequences", Boyd is sitting in the congregation seats that night, carrying a bag full of cash. Boyd attempts to bribe Cassie into packing up and moving the Last Chance Salvation, but Cassie rejects the bribe, saying that if he wants her and Billy to leave, she will need more money for a permanent place. Later on, Boyd appears at a sermon, holding a metal box with a venomous snake in it he collected from a ravine. Boyd forces Cassie to come clean about milking the venom from all of Billy's snakes, shaming him in from of his congregation. An angered Billy decides to handle the snake, despite protests from Cassie and Boyd, who tells him not to push his luck. The snake bites Billy, who collapses. Cassie screams for someone to call an ambulance.

In "This Bird Has Flown", she is called in by Sheriff Shelby Parlow for questioning. Shelby asks her if she knows anything on Boyd that he can charge him for. Cassie tells him that Boyd is a drug pusher, he attempted to bribe her to move their church, and that he sent thugs to the church to scare them. Shelby asks if there is anything else, but she asks him isn't that enough. Cassie vows that Boyd will have his reckoning one day. It's revealed the questioning was a ruse so that Boyd (listening in on the conversation via speaker phone) could find out if Ellen May had confessed the ongoings at Audrey to the St. Cyr siblings.

In "The Hatchet Tour", Cassie arrives at Audrey's and talks to Ava Crowder, asking her where Ellen May. Ava assures her that she is in Alabama, but Cassie finds this funny as Ellen May called a parishioner looking for guidance yesterday. Later, Colton Rhodes, arrives at the church and questions her about Ellen May and proceeds to strangle her before Tim Gutterson intervenes. Tim later drives her home and gives her his card in case Boyd or Colt show back up again. Cassie tells Tim "it's been a while since anyone’s shown me any kindness."

In "Peace of Mind", Ellen May visits her at the church and confesses to the murder of Delroy and her participation with the burial. Ava Crowder overhears this and holds a gun at Ellen May. Cassie challenges her by saying that if she is going to kill Ellen May, then she has to kill her too. After the situation is resolved, Tim and Cassie talk. Cassie admits that Billy was the one pure of heart and says that she prayed that Boyd would end up being killed.

In "Ghosts", Cassie turns out to be the anonymous tipster that told law enforcement where they could find Delroy's body. Cassie watches the bust in the distance before driving off in her truck.

Retrieved from "https://justified.fandom.com/wiki/Cassie_St._Cyr?oldid=17599"
Community content is available under CC-BY-SA unless otherwise noted.