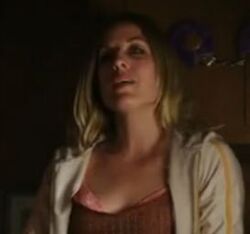 Cat is a supporting character in the FX series Justified Season 3 episodes "Measures" and "Coalition". Cat is a prostitute who formerly worked at Audrey's, the local bar and brothel owned by Ava Crowder at the time. Robert Quarles comes in with drugs, and Cat (along with fellow prostitute Minerva) believe Quarles to be a client. Cat is portrayed by co-star McCready Baker.

In "Measures", Cat is in the back trailer at Audrey's with Minerva when Quarles shows up. The two women believe Quarles is a client, but he assures the women that he is strictly there for business only. Cat says that Quarles looks like the act from a Butterfly movie, and Minerva asks if it is the one about the time traveler (referring to the film The Butterfly Effect). Later, Cat is ordered by Boyd Crowder to strip the unconscious Quarles after Boyd tases him unconscious.

In "Coalition", Quarles awakens to find Cat and Minerva testing out his tricky sleeve holster gun. The three of them get high after learning that Boyd left behind some Oxy for Quarles. Quarles then develops a "shotgun bong" where the women inhale the smoke from burning Oxy through a shotgun barrel. Jimmy comes in and says that there are customers waiting, but gives the women and Quarles five more minutes. Cat finds herself with Quarles's chain around her neck, and Quarles orders Minerva to call Jimmy inside. Quarles escapes, but bonds the three of them together. Raylan Givens soon discovers the three who have no idea where Quarles is headed, and Raylan leaves the three of them chained together after saying that they are better off that way.

Retrieved from "https://justified.fandom.com/wiki/Cat?oldid=18439"
Community content is available under CC-BY-SA unless otherwise noted.