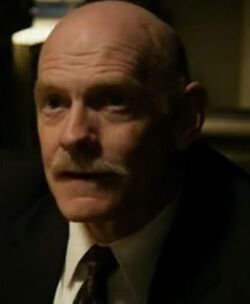 Charlie Weaver is a recurring character in the second and third seasons of the FX series Justified. Weaver watches over the evidence locker at the Marshals office in Lexington, Kentucky. In "When the Guns Come Out", he ends up stealing the old robbery money that was heavily involved in the plots of "Blaze of Glory" and "Save My Love" and retires from his job, heading into Mexico for a well-deserved vacation. Weaver is portrayed by co-star Casey Sander.

Charlie Weaver works at the Marshals office in Lexington, Kentucky. There, he watches over the evidence locker.

In "Blaze of Glory", Weaver runs into Raylan and Winona who are waiting for him in the evidence lock-up and Raylan has Wever open the cage so Winona can get some transcripts for the Coal company case. He directs Winona to the old main boxes and gives her the key while he takes a call from the ATF. While he is there Winona steals some old money confiscated from a bank robbery 20 years ago from locker 242.

In "Save My Love", He is visited by U.S. Marshalls Art Mullen, Tim Gutterson, Rachel Brooks and Raylan Givens. They tell him to look for some evidence from 20 years ago and that the date is May 1990. Through a little digging they discover that the bank is gone, the money was ordered back to the bank and the judge that issued the order, Reynolds, is dead. Charlie then suggests that the money was never sent back and that it happens all the time. They look up the case number and go to search the locker where the money is supposed to be. When they don't find the money Charlie locks it back up and they all head back. After Charlie has left Winona and Raylan take his keys and put the money back but in a different locker (247) so as not to draw suspicion.

In "When the Guns Come Out", Raylan Givens visits him at the evidence locker since he believes Winona stole the robbery money there and is headed to Costa Rica. Raylan goes to the locker (247) and finds it empty, while Weaver watches him from behind. At the end of the episode, Art Mullen and Raylan are talking in Art's office while drinking bourbon. Art tells Raylan that one of the bills popped in El Paso, and Raylan asks if anyone has talked to Charlie. Art tells him that Charlie went home sick on Tuesday and hasn't been seen since, and Raylan says that Charlie seemed fine that day. The Federale stops Charlie at a convience store, and asks for his ID. He warns Charlie that Mexico is a dangerous country filled with desperate men. Charlie laughs and then speeds off in his convertible.

Retrieved from "https://justified.fandom.com/wiki/Charlie_Weaver?oldid=21567"
Community content is available under CC-BY-SA unless otherwise noted.