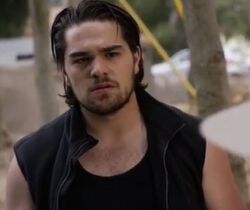 Choo-Choo (real name Mundo) is a recurring character who appears in the sixth season of the FX series Justified. He is portrayed by guest star Duke Davis Roberts.

Choo-Choo is a dim-witted accomplice working alongside Seabass and Ty Walker. It is revealed that he is dim-witted due to shrapnel in his skull. An Injury he received when a vehicle he was riding in, exploded during his military time in Iraq. His nickname Choo-Choo is due to how hard he hits you and you don't see it coming. He is also an employee of Tiger Hawk security and also served in Special Ops alongside Seabass and Walker.

In "Cash Game", he is ordered by Ty Walker to trail US Marshals Raylan Givens and Tim Gutterson when they leave Calhoun Schrier's office but they end up catching him and after a conversation, Raylan seizes his car and leaves him on the road. Tim later drives and picks up the hitchhiking Choo-Choo (who is unaware that Tim is a Marshal himself) and they go back to their headquarters at an old pizza parlor where Choo-Choo makes continuous threats to kill the "cowboy".

In "Noblesse Oblige", he spots Ava as she is taking photos of the vault in the basement of the pizza parlor, but believes her story that she was looking for the bathroom and got lost, and escorts her out. Later, he and Seabass abduct Boyd Crowder from the bar.

In "Sounding", Choo-Choo notices a waitress skimming money from the cash register while Walker discusses that someone has been interfering in their plans to buy up properties in Kentucky and drops various clues to the waitress (such as asking for "skim milk") when she comes to the table. Later, he and Seabass interrogate Calhoun Schrier in order to find out who he gave information to, however, the interrogation goes wrong when Choo-Choo accidentally kills Calhoun when he punches him in the head.

In "Alive Day",  he is present along with Walker and Seabass as they discuss what to do with Calhoun's body and Seabass agrees to look for Caprice (Calhoun's prostitute who saw his and Seabass's faces the night they visited Calhoun) until Choo-Choo agrees to it, wanting to clean up his own mess. He begins to have a change of heart with executing Caprice when she promises not to burn them but this causes Walker to want to execute him after being given a pep talk by their boss Avery Markham. However, Raylan and Tim intervene before the execution can happen, causing a shootout to ensue where Walker gets away and Choo-Choo is riddled by bullets from the two marshals before managing to get in his car and drive away. Choo-Choo eventually bleeds to death while stopping on railroad tracks as a train approaches.