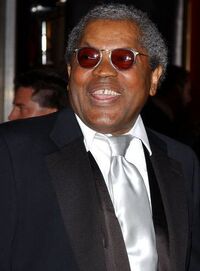 Clarence Williams III (August 21, 1939 - June 4, 2021) was an American actor who guest stars as Mr. Jones in the FX series Justified first season episode "Long in the Tooth". He starred in The Mod Squad as an undercover detective from 1968 to 1973. He also appeared in the series Karen Sisco, which was also based on the writing of Elmore Leonard.

He was born on August 21, 1939 in New York City, New York, U.S.A. His father, Clarence Williams II, was a touring musician so he was raised by his grandparents. His grandfather was Clarence Williams, the jazz pianist and composer known for writing "T'Aint Nobody's Business If I Do" and "Baby, Won't You Please Come Home." His grandmother was blues singer Eva Taylor (1895-1977). While attending a local YMCA as a teen, Williams became interested in dramatics. After a two-year tour with the U.S. Air Force, he started up his acting career.

He made a minor New York stage debut with "The Long Dream" in 1960. He continued impressively with roles in "Walk in Darkness" (1963), "Sarah and the Sax" (1964) and "Doubletalk" (1964), and capped his early career with a Theatre World Award and Tony-nomination for the three-person play "Slow Dance on the Killing Ground" (1964). Continuing on with powerful work in "Does a Tiger Wear a Neckie?" (1966) and "King John," Vietnam-era Hollywood finally began to take notice of his "angry young man" charisma.

His first major acting role was as Lincoln B. Hayes on Aaron Spelling's TV series The Mod Squad in 1968. He played Hayes, a former delinquent turned undercover cop, until the series cancellation in 1973. He wore a large Afro, paisley shirts and dark shades and was known for his use of slang. Following the conclusion of the series he purposefully avoided parts in blaxploitation films and returned to the stage. He appeared on Broadway opposite Maggie Smith in Tom Stoppard's play "Night and Day" (1979).

He played the abusive father of musician Prince in the film Purple Rain in 1984. He played a burned out political activist in the spoof I'm Gonna Git You Sucka in 1988. He had a recurring role as Roger Hardy in the twisted mystery series Twin Peaks in 1990. He played a good guy cop in the film Deep Cover in 1992. He played Wesley Snipes heroin addicted father in the 1993 film Sugar Hill. He played a prison rioter in the Attica-themed mini-series Against the Wall in 1994. He played a supportive role as George Wallace's fictional African-American butler and caretaker in the 1997 TNT TV movie George Wallace. He appeared uncredited in the film American Gangster as Ellsworth Raymond "Bumpy" Johnson in 2007.

He has guest-starred in the television shows Karen Sisco, Hill Street Blues, Miami Vice (with Mykelti Williamson), The Highwayman, Law & Order, Profiler, Judging Amy, Star Trek: Deep Space Nine, Burn Notice, Everybody Hates Chris, and in a recurring role as Philby Cross in the Mystery Woman movie series on the Hallmark Channel. He has appeared in feature films such as Life, The Cool World, Tales from the Hood, Half-Baked, Hoodlum, Frogs for Snakes, Starstruck, The General's Daughter and The Legend of 1900.

He was married to actress Gloria Foster, and they appeared together in the movie The Cool World (1964). Following their divorce, they remained friendly and upon her death in 2001, it was he who made the formal announcement.