Edit
watch 01:36
We're Getting Mutants in the MCU - The Loop
Do you like this video?
Play Sound
Colt 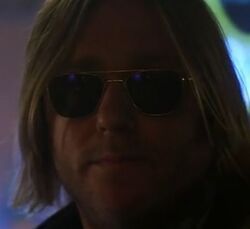 Colton "Colt" Rhodes was a recurring character and one of the main antagonists in the fourth season of Justified. Colt is a former military police officer. He jailed Boyd Crowder several times when they served together in Kuwait, eventually befriending him. Colt joins Boyd's criminal organization in Harlan after being discharged from the military. In "Peace of Mind", Colton is shot & killed by Tim Gutterson. Colt is portrayed by guest star Ron Eldard.

Colt was a former military police officer. He is from Bel Air, Harford County, Maryland. He jailed Boyd Crowder several times during their shared service in Kuwait, ultimately befriending him.

Colt rose to the rank of first sergeant but was demoted back to sergeant prior to his discharge from the military. He was demoted for kneeing an officer in the groin during a charity baseball game. He was discharged from the military after shooting the same officer in the bicep for reporting the incident. In "This Bird Has Flown", it is revealed that Colt has an addiction to heroin.

In "Hole in the Wall", Colt comes to Johnny Crowder's bar looking for Boyd. Both Jimmy and Johnny deny knowing who Boyd is when he questions them. Due to his military police training, Colt recognizes Jimmy as a bad liar and realizes that Boyd is out back. Colt overpowers Johnny and heads for a back room. He passes Ava, spinning her around and calling her beautiful. She follows him with a shotgun, only to find Colt and Boyd hugging.

Boyd takes Colt for a drive and they stop to talk on the bridge to Nobles Holler. Boyd requests Colt's assistance in dealing with Hiram Pugh, a former drug dealer who owes Boyd money. Boyd and Colt torture Hiram, tying him up and placing a stick of dynamite at his groin. Boyd lights the fuse and as it burns down, Hiram confesses where he has hidden his money. Boyd asks Colt to "take care" of Hiram, and Colt shoots Hiram in the head. Boyd explains that he meant for Colt to untie Hiram and they share a joke about the misunderstanding.

In "Where's Waldo?", Boyd finds him in the back trailer at Audrey's, punching a heroin dealer named Danny several times. Colt knew the man was a heroin dealer just by looking at the way he walks from his military experience, and found heroin on him after patting him down. Colt concludes that the church isn't Boyd's only problem. Colt and Boyd learn the man is from Frankfurt, Kentucky. Colt later accompanies Boyd and Jimmy to the Last Chance Salvation Church.

In "Truth and Consequences", Colt and Jimmy are sent by Boyd to Billy St. Cyr's tent that night after Cassie rejects his bribe. The two hear hissing, and Jimmy is ambushed by several of Billy's snakes, one of which latches onto his cheek. Colt carries Jimmy back to Johnny's bar.

In "This Bird Has Flown", Colt is ordered by Ava to drive Ellen May to the bus station so that she can go to Alabama and work for Boyd's cousin. While on the way, Ava orders a change in plans, and Colt has to kill Ellen May. Colt covers this up when Ellen May asks who he was talking to, telling her that Ava changed her mind and Ellen May can work for her again. He stops at a gas station, telling her to pump while he uses the bathroom. In there, he snorts up Oxy, cocks his gun, and hears a knock at the door. When he comes out, he finds Ellen May missing.

In "Kin", Colt watches the surveillance footage from the gas station camera, and sees Ellen May approaching a police car that is just out of frame. Colt visits Sheriff Shelby Parlow and asks about Ellen May, but Shelby says that he hasn't heard anything. Colt doesn't buy it and leaves, taking a card with Shelby's number on it to call him on. At Johnny's bar, Colt lies to Boyd and says that he killed Ellen May around midnight and threw the body into a slurry pond. Outside of the hills, he sees Tim Gutterson, and the two share their military stories when Raylan Givens comes back. Raylan tells him where to locate Boyd, and tells him to bring a saw. Colt visits Shelby again, and Shelby tells him that one of his deputies saw a woman fitting Ellen May's description getting into a long-haul truck with a man she recognized. Unbeknowst to Colt, Ellen May was hiding out in Shelby's office for safety because he knew that Ava and Boyd were going to kill her.

In "Foot Chase", Colt is seen smoking heroin in the bathroom of Johnny's bar. At the veteran's center, Colt enters and holds the sole occupant in the bathroom hostage, looking to find a heroin dealer. At Audrey's, he trashes the room of working girl Teri looking of drugs, and smacks her around with accusations that she is hiding Ellen May. Colt threatens to cut her tongue out if she tells that he hit her. Johnny and Colt visit Max, one of Teri's frequent clients. Colt brutally attacks the man, almost to death before walking out of the room.

In "Money Trap", Johnny learns that Colt was responsible for attacking Teri, who says that he was tweaked out and questioned her about Ellen May. Johnny, under the impression that Colt is becoming a drug addict because of his guilty conscience, questions him in the bar. Johnny asks if he sees the faces of innocents in his sleep and tells him that Ellen May wasn't innocent.

In "Outlaw", Colt receives texts from "Ellen May", wanting $20,000 in exchange for silence. Colt visits Dave, Mark's former drug dealer and demands a loan. Dave laughs this off, and Colt executes the man, stealing his money. Colt later hears Mark in the house, and finds him in the kitchen. Colt asks for his silence, and Mark complies, only to be shot in the head by Colt. At a baseball field, "Ellen May" orders him to put the money in the groundskeepers shed on top of the fusebox. Unbeknowst to Colt, the texter is actually Johnny himself, who discards the cell phone in a trash can.

In "The Hatchet Tour", Boyd questions Colt after learning that Cassie St. Cyr arrived at Audrey's, telling Ava that Ellen May called a parishioner looking for guidance yesterday. Colt once again lies and reassures them that he did indeed kill Ellen May. Boyd orders Colt to find Cassie and bring her in for further questioning. At the church, Colt arrives and explains to her that he is looking for Ellen May, and proceeds to strangle her before Tim intervenes and stops him from harming Cassie any further. Boyd soon shows up and orders Colt to put the gun down, and Tim lets everyone go. Back at the bar, Boyd questions Colt again about Ellen May, and he sticks to his story that he killed her. Colt finally admits the truth, that he messed up by losing track of her, and that he tried to make it right by trying to get Shelby to help. Boyd is now shocked and furious to know that Shelby knew Ellen May was alive.

In "Get Drew", Boyd wants Colt to accompany him on their interrogation of Nicky Cush, the former owner of Audrey's who may know Ellen May's whereabouts. Nicky tells them that Ellen May has been hiding out at Limehouse's, as she used to always threaten to go there. When Boyd and Ava buy back Shelby with their $300,000, Colt is ordered to drive Shelby to the meeting place where he is going to be picked up by Nick Augustine. Shelby begins to taunt and insult Colt, hoping that Colt would shoot him as he'd rather be dead than be taken by the Tonin family. Colt begins to laugh at Shelby, realizing what he is up to.

In "Decoy", Colt sets up a trap using three abandoned cars as explosives in an effort to block the Marshals in so that they can retrieve Drew. A suspicious Tim realizes something isn't right, and pulls besides the Kentucky State Police truck to do what Colt calls "circling the wagon". Colt and Mort realize not only is the man they believed to be Raylan just a KSP Officer, but that Drew is nowhere to be found. Colt shoots and kills Mort.

In "Peace of Mind", Colt and Ava go to the church to find Ellen May as Boyd and the gang believe that she is at the church or at Nicky's house. At the church, Ava cannot go through with killing Ellen May, so Boyd calls Colt to perform the execution. Tim arrives just in time and a stand off occurs between Colt and Tim. Colt smokes a cigarette and admits to Tim that he killed Mark. Colt then attempts to draw on Tim, who guns him down and kills him.