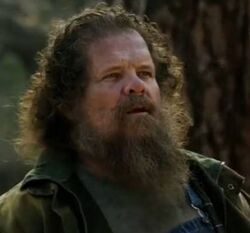 Cope is a recurring character in the FX series Justified. Cope is the leader of the hillspeople that hold Raylan Givens and Boyd Crowder hostage. He is portrayed by guest star Tom E. Proctor.

Not much is known about his background.

In "Kin", he comes into the shed with a shotgun pointed at Raylan, as he points Daniel's shotgun back at them. He reveals that Josiah tipped him off about Raylan coming. He also says that he loves Daniel even after a rock fell on him as a child, but doesn't trust him with a loaded gun and that the shotgun Raylan holds doesn't have a firing pin. He is taking Raylan and Boyd to an abandoned mine shaft to be executed, but Daniel comes to them with Mary, the cousin of Raylan and his mother Frances Givens. She forbids them to execute Raylan, but tells them to execute Boyd. Raylan intervenes in Boyd's defense, saying that if anybody gets killed he'll have to report it all to his bosses at the marshal's office.

In "Collateral", Raylan finds Cope in the mountains as he informs Raylan that his people have all been forced further down the mountains due to a search for clean water and that his cousin Mary has passed away since his last visit. Cope tells Raylan that Arlo used the hillspeople to transport drugs through the mountains because of the blood connection with Mary and that Raylan is a "son of a bitch" for using them just like Arlo. Raylan knocks Cope on the ground before he can do anything and Raylan bequeaths Arlo's property to Cope as compensation in case Raylan is killed while pursuing Boyd.

Retrieved from "https://justified.fandom.com/wiki/Cope?oldid=20020"
Community content is available under CC-BY-SA unless otherwise noted.