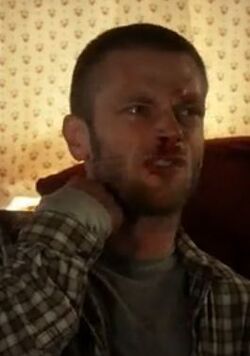 Danny is a guest character in the FX series Justified fourth season episode "Where's Waldo?". Danny is a drug peddler for the Dixie Mafia, helping to distribute their heroin. He is portrayed by co-star George Jonson.

In "Where's Waldo?", Danny is caught by Colton Rhodes who punches him several times (Whose military experience helped him single out heroin dealers). Danny was attempting to distribute heroin at Audrey's bar, and Colton says that Boyd has another problem on his hands besides the church. Danny then threatens Colton and Boyd about the people he works for. Boyd checks his wallet and sees that the man is from Frankfurt, the center location of the Dixie Mafia. He is tied up in the bar when Wynn Duffy and his gang arrive. Duffy apologizes if any of his men strayed and then shoots Danny in the head.

Retrieved from "https://justified.fandom.com/wiki/Danny?oldid=17924"
Community content is available under CC-BY-SA unless otherwise noted.