Edit
watch 01:36
We're Getting Mutants in the MCU - The Loop
Do you like this video?
Play Sound
Danny Crowe 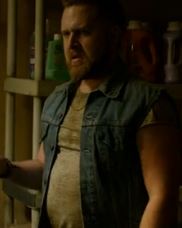 Name
Danny Crowe
Birthplace
Florida
Birthdate
Unknown
Age
30s
Status
Deceased
Cause of Death
Stabbed in the neck with a knife after falling on it by accident
Affiliation
Crowe family
Actor
A.J. Buckley

Danny Crowe was a recurring character in the fifth season of the FX series Justified. He is the brother of Daryl, Wendy and Dilly Crowe, and a member of the Crowe family based in Florida. In "Weight", he accidentally kills himself when he stabs himself in the neck after charging at Raylan and falling in a hole meant for his dead AmStaff Terrier, Chelsea. He is portrayed by guest star A.J. Buckley.

Danny was a member of the Crowe family based in Florida. Danny is depicted as being the most sociopathic member of the family, killing his own brother, and also wanting to kill Raylan Givens (a US Marshal), being completely apathetic to the amount of heat it would bring his family by doing so. Danny also owned a Staffordshire Terrier named Chelsea (which is ironically, a boy dog), but Chelsea is killed after being hit by a car while chasing a cat. It's likely that Danny was aware that the dog was a boy and was simply calling him by a female name to make him tougher.

In "A Murder of Crowes", he stabs Dilly Crowe to death after Dilly creates a federal case for the Crowe family when he murdered coast guard Simon Lee.

In "Good Intentions", he is seen at Audrey's with Jean Baptiste, who have brutally beaten up Wade Messer for skimming money and double crossing Dewey Crowe.

In "Over the Mountain", US Marshals Raylan Givens and Tim Gutterson find Danny (along with his Mastiff, Chelsea) at Wade's house. Danny tells them that since his arrival to Florida, he has been staying with Messer. At Audrey's, Danny implies killing Raylan which both Jean Baptiste and Daryl advise against. Raylan later shows up at the bar to detain Kendal under state mandate, as he is a minor working in a bar. Daryl, Baptiste and Danny all stand up, prepared to defend Kendal until he voluntarily surrenders.

In "Shot All to Hell", Jean Baptiste confronts Danny for not going shopping for a list of food that Wendy Crowe has requested, and steps in to distract Danny from bullying his younger brother Kendal . He offers to accept the "21 foot rule" challenge in Kendal's stead, Danny appears to back off and walks away but reaches over the bar to retrieve the "house shotgun," spins and fatally shoots Baptiste. Danny threatens Kendal not to say anything about the murder.

In "Kill the Messenger", Danny barks at Alison Brander as she leaves the house following her check-in on Wendy and Kendal. Danny drives his van and runs Alison off the road, barking at her and laughing as she looks on. At the bar, Daryl begins to question Jean Baptiste's whereabouts, and Danny (with Kendal backing him) says that Jean Baptiste got fed up with Daryl and left Kentucky and went back to Florida. Dewey recruits Danny to hold Boyd at gunpoint and force him to pay the money upfront, but end up using Carl as ransom when he is the only person at the bar and assaults both men. Raylan and Rachel Brooks find Danny and Carl at the cabin, and Carl covers for them, saying that they were doing a S&M roleplay and that they never worked on a safeword. Danny later accompanies Boyd Crowder when they assault Gunnar Swift.

In "Raw Deal", Daryl and Danny are seen gearing up weapons as they head to Memphis to hunt down Johnny, who is gone by the time they get there. Near the end of the episode, Daryl, Danny, Dewey, Carl and Jimmy Tolan hop out the back of a van as they prepare to take Johnny Crowder hostage. Danny, however, executes all of Dunham's henchman after getting the signal from Daryl.

In "Whistle Past the Graveyard", Danny is mostly seen accompanying Daryl, Carl, Dewey, Jimmy and Boyd smuggle the heroin across the Mexican border.

In "Wrong Roads", Danny and Dewey drive the heroin back to Kentucky, where they end up getting lost when Dewey's GPS doesn't work. Later that night, they are stopped by DEA Agent Alex Miller. Dewey pulls out his knife, challenging Miller to the "21 foot rule". Dewey runs both Danny and Miller over as he flees in the truck. Danny gets back up, his face bloody as he looks on at Dewey driving off in the distance.

In "Weight", Danny informs Daryl about Dewey taking off and stealing the heroin. After Wendy finds Kendal, Danny learns that Chelsea was hit by a car while chasing a cat, and a scuffle ensues between the two with Kendal admitting that Danny killed Jean Baptiste to Daryl. Daryl sends Danny to retrieve Dewey from Cyrus Boone's, but not before punching Danny for lying. While Danny is mourning the loss of Chelsea, Raylan shows up, interested at what Danny has in the duffel bag and tells him not to go any further to Audrey's with it. Danny challenges Raylan to the "21 foot rule" and charges at him with the knife, but trips and falls into the hole that was dug to bury Chelsea. He comes out of the hole with the knife lodged in his neck, and bleeds to death.