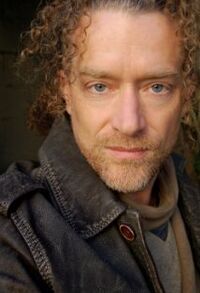 Darin Heames is an American actor who had a recurring role as Mickey in the first season of the FX series Justified. He has been acting since 1992 and has had recurring roles in the Fox drama 24 and the FX crime drama Sons of Anarchy.

He graduated from Forest Sherman High School in Naples, Italy in 1985.

In 2010 he guest starred as Mickey in the first season of the FX series Justified. He appeared in the episodes "Veterans" and "The Hammer". He also had a recurring role in 10,000 Days, appearing in three episodes. He appeared in the pilot of Parenthood as Seth Holt, the father of one of the main characters. The role was recast with John Corbett in later seasons. He had roles in the films Jonah Hex and Happiness Runs. Later in 2010 he had a recurring role in the third season of FX crime drama Sons of Anarchy appearing in four episodes as Seamus Ryan, a member of the Belfast chapter of the titular motorcycle club. At the close of the season Ryan had become the president of the chapter.

In 2011 he appeared in CSI, The Mentalist, Days of our Lives and Castle.