Edit
watch 01:36
We're Getting Mutants in the MCU - The Loop
Do you like this video?
Play Sound
Daryl Crowe Jr. 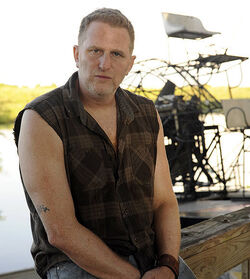 Daryl Crowe Jr. was a recurring character and one of the main antagonists in the fifth season of the FX series Justified. Daryl is the cousin of Dewey Crowe and the head of the Crowe family based in Florida. In "Restitution", he is shot & killed by Wendy Crowe. Daryl Crowe is portrayed by guest star Michael Rapaport.

Descibed as both "brutal" and "sexy," Daryl Crowe Jr. runs a drug trafficking operation based in Florida, along with an alligator farm kept by his faithful lieuteneant Jean Baptiste, a former secret policeman from Haiti. Daryl is the cousin of Dewey Crowe, the brother of Dilly, Wendy, and Danny, as well as the uncle of Kendal.  He is first referenced by Raylan and Dewey Crowe in the Season 1 premiere, "Fire in the Hole", during their encounter at the home of Ava Crowder. In his family, he is depicted as being more "street smart" when it comes to the ways of being a criminal. He is also shown to have a vast knowledge of business economics, having taken courses during his time as a prisoner.

In "A Murder of Crowes", Raylan and Florida US Marshal Greg Sutter go to visit Daryl as he is a known associate of Elvis Machado, who was involved in the murder of corrupt coast guard Simon Lee. Daryl realizes that his cousin Dilly has created a "federal situation" by murdering the Guard Guardsman, and tells him to get rid of the body. Daryl agrees to help Raylan on his investigation and gives up Elvis's location when he abducts Wendy. Daryl is off parole after holding up his end of the deal to give up Machado.

In "The Kids Aren't All Right", Daryl is seen at Audrey's and hugs Dewey, who seems less than happy to see Daryl in Kentucky.

In "Over the Mountain", Daryl talks with Danny and Jean Baptiste, irritated that they have Marshals looking into them, and advises Danny against killing Raylan, as that would only draw a bigger target on their back. He is also irritated that both Messer and Dewey have been MIA since last night, and manages to find Dewey when he calls him. He locks Dewey up in a trailer at Audrey's, blackmailing him to work with the Crowe family by outing him murdering Messer. Later on, Raylan arrives at the bar to detain Kendal under state mandate, who is a minor working at the bar. Daryl refuses to let Raylan walk out of the bar with his brother, but Kendal surrenders. Daryl is also unmoved by Raylan's threat to leave and go back to Florida.

In "Shot All to Hell", Daryl and Jean Baptiste are in Boyd's bar, waiting for Boyd (who enters the bar and keeps up a ruse that he is a customer). Boyd soon reveals himself to the two men and points his gun at Daryl, giving him 60 seconds to say what he needs. Daryl follows up on Dewey’s demand for a more accurate sale price on Audrey’s, but Boyd says no. Wendy returns Kendal back into Daryl's custody, and Daryl tells them that the family needs Wendy to keep them together, as she is the smart one, but she doesn't want to stay around. Wendy insists they’ll need a residence to house Kendall, proposing they do “the old thing.”

In "Kill the Messenger", Daryl is wondering about Jean Baptiste's whereabouts when he talks to Danny and Kendal at the bar. Danny claims that Baptiste had gotten fed up with Daryl and left to go back to Florida. Kendal backs his story up, and Daryl doesn't press the issue any further. At the bar, Boyd shows up with Carl Lennon, recruiting Daryl to help him avenge Ava's jump in the prison. Daryl brutally beats up Gunnar Swift to send a message to Gunnar's sister, Gretchen, to not harm Ava any further. Boyd later recruits Daryl's services to help him kill Johnny.

In "Raw Deal", Daryl and Danny are seen gearing up weapons as they head to Memphis to hunt down Johnny, who is gone by the time they get there. Near the end of the episode, Daryl, Danny, Dewey, Carl and Jimmy hop out the back of a van as they prepare to take Johnny hostage.

In "Whistle Past the Graveyard", Daryl is mostly seen accompanying Danny, Carl, Dewey, Jimmy and Boyd smuggle the heroin across the Mexican border. Danny suggests enlisting the help of Corey Flores to help smuggle the drugs across the border, although Daryl is wary of this given Flores's hatred of him. Daryl meets up with Flores, who gives them a boat and he will smuggle the drugs and meet them in Galveston, Texas. Jimmy, who is fluent in Spanish, overhears two of Flores's henchmen talking and relays to Boyd that Daryl had called Flores days earlier, realizing that Daryl had everything planned all along and was setting them up.

In "Wrong Roads", Daryl and Boyd are talking in Boyd's office, where he reveals that he knows Dunham's men never drew on Daryl and Danny, and Daryl reveals he knows Boyd is drawing a gun on him under the table. Daryl threatens him, saying it'd be a shame if Danny and Dewey took a wrong road and got busted with the heroin, and that all he wants is to be a part of the family. During his meeting with Wynn Duffy, Ethan Picker and Boyd, Daryl says that he wants 20% of the cut, but Duffy and Picker both refuse and only offer 10%, as Daryl's family would be receiving cuts as well, which would be more money than any of them could make. In a trailer at Audrey's, Daryl digs through the sock drawer, being suspicious when Kendal tries to stop him from looking around, and finds the envelope of money Kendal was given by Raylan. Kendal lies, claiming he stole it off of the john's, but Daryl pockets it and refuses to give it to Kendal, causing him to storm off in anger. Wendy announces that her and Kendal are both leaving Kentucky, once they receive their cut. As Wendy leaves the trailer, Daryl kicks a dresser in anger.

In "Weight", Daryl attempts to tell Boyd that Dewey has ran off with the heroin, but is interrupted by a call from Dewey, demanding $250,000 so that he can leave Kentucky and in exchange, he will give them the half of the heroin he has in his possession. Daryl intends on giving Dewey $250,000 in counterfeit cash, but it is confiscated by Raylan when he visits Audrey's, looking for Dewey. After Wendy finds Kendal, a fight ensues between Danny and Kendal when Danny learns that Chelsea was hit by a car. Kendal admits that Danny killed Jean Baptiste, which shocks Daryl that he was lied to. Daryl punches Danny over this. Later, Daryl is seen mourning over Danny's death, but Wendy isn't. Wendy punches Daryl in the face after he makes an insult to her about not claiming Kendal as her son, and he punches her in the stomach and apologizes, only to be hit by a wine bottle. Daryl beats Wendy up, dragging her by the hair and kicks her hard in the stomach. He finds Kendal in the back trailer and does a "blood bond" by cutting his and Kendal's palm and touching their hands together.

In "The Toll", Daryl arrives at the Marshal's office with Kendal in tow, surrenduring himself. At the end of the episode, he is released from custody and Raylan deducts that Daryl had Kendal lie for him and was really the one responsible for shooting Art Mullen, not realizing it was a US Marshal until it was shown on the news. Raylan threatens to strangle Daryl with his web of lies, and Daryl counters with a threat of his own before the elevator doors close.

In "Starvation", Daryl goes to the hotel room that Duffy and Picker had previously been staying at, where he finds Mike Cosmatopolis. Daryl brutally assaults Mike, wanting to find out where Boyd's heroin is located and Mike confesses that Carl and Jimmy are in possession of it. Daryl hides out at the bar when Caleb and Carl enter. Daryl shoots Caleb in the leg and Carl confesses that the heroin is at the old barn in Loyal. Daryl, realizing that Raylan and the Marshals will follow him, sends Wendy to the barn to retrieve the drugs and that the money they can make from it is enough to get a lawyer for Kendal. As part of a sting with the Marshals to confirm Daryl shot Art, Boyd (wearing a wire) meets with Daryl at Audrey's, heroin in tow before their meeting is interrupted by Dewey, who holds them both at gunpoint and takes the duffel bag before he is arrested. At the Marshal's office, Wendy and Daryl learn that Kendal is going to be tried as an adult for the attempted murder of a federal officer which will be 40 years to life (this is all a play by Mike Reardon, Raylan and David Vasquez to smoke out Daryl).

In "Restitution", Daryl is escorted out of the Marshal's office, but threatens Raylan on his way out. While he is being followed down the road by Tim Gutterson, Daryl speeds a red light, causing Tim's vehicle to collide with an oncoming pick-up truck, although Tim is not killed. Daryl gets a call from Wendy, who tells him that the sentencing to try Kendal as an adult was fake and was just a ploy to get Kendal to rat against Daryl and she wants to meet with him at Audrey's. Wendy gets Daryl to admit that he shot Art, believing that Kendal would have just gone to juvy and it'd be no big deal. Wendy says that she has all she needed to know, pulling out her phone and revealing she recorded Daryl's confession, as he gets up and threatens her to give him the phone, stopping as she points a gun at his groin. When Raylan enters, she shoots Daryl twice, once in the groin and once in the side of the throat. As he bleeds to death, Raylan leans over his body and says "Didn't I tell you, you were gonna wish I killed you? Well, don't ya?"