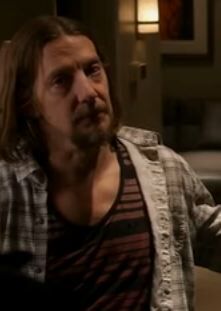 Dave is a recurring character in the fourth season of the FX series Justified. He was a former supplier to Mark, who supposedly owes him a huge debt. He is portrayed by guest star Michael Stoyanov.

Not much was known about his background.

In "Foot Chase", Tim Gutterson and Mark visit him in order to settle a debt that Mark owes him. The dealer tells Tim that Mark does not owe him a debt at all, but rather ripped him off by stealing $800 and bottles of Oxy. Tim manages to resolve and issues, and forces Mark to comply when the dealer demands everything that Mark is carrying at the moment.

In "Outlaw", Colton Rhodes visits him and demands a loan. The dealer laughs this off, and Colt executes the man, stealing his money.