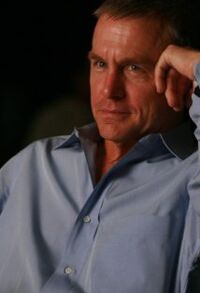 David Andrews - born c. 1952 in Baton Rouge, Louisiana, USA - is an actor. He has a recurring role as Tillman Napier.

David Andrews, born and raised in raised in Baton Rouge, Louisiana, graduated summa cum-laude from Louisiana State University, before going on to study law and graduate from Stanford Law School. After becoming a member of the California bar and practicing law for a short time, he took what he calls a "hard right," deciding to leave the legal profession for a career in acting.

Now a 30-year industry veteran, David Andrews has worked with some of Hollywood's top directors, being singled out by critics recently for his "bracingly unapologetic performance" as Scooter Libby in Fair Game. His other films include The Conspirator, Terminator 3, Fight Club, Hannibal, A Walk to Remember, Wyatt Earp, Apollo 13, Stealth,Dear John, Cherry 2000, Graveyard Shift, and Under Pressure. A highly versatile actor and consummate professional, his roles have run the gamut from powerful leaders to hapless criminals. He can soon be seen in the highly anticipated film WWZ, working opposite Brad Pitt, and in Arthur Newman, Golf Pro starring Colin Firth.

On television, David has starred as a series regular on JAG, The Monroes, Mann & Machine, The Antagonists, and Pulaski, for which he received an ACE Award nomination. In addition to a very long list of guest star roles, David has appeared in numerous mini-series, including HBO's From the Earth to the Moon, for which he received critical acclaim as astronaut Frank Borman. Other mini series/mow's include Band of Brothers, The Rat Pack, Switched at Birth, The Dead Will Tell,The Burning Bed and many others. His recurring roles have included characters on CSI, Dragnet, The Practice, Murder One, Drop Dead Diva, and Brothers and Sisters. He is currently recurring as "Sheriff Napier" in the hit FX series Justified.

David recently finished co-writing his second feature film script, Bushido, an action/adventure tale of self-discovery set in Japan, amidst the chaos and destruction of the final days of WWII.

He lives in North Carolina with his family and two dogs.

Retrieved from "https://justified.fandom.com/wiki/David_Andrews?oldid=15046"
Community content is available under CC-BY-SA unless otherwise noted.