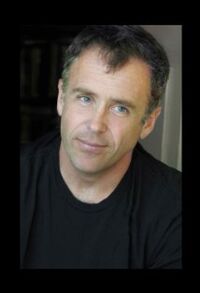 Eigenberg was born in Long Island, New York and grew up in Naperville, Illinois. His mother, Beverly, owns pre-schools, and his father, Harry Eigenberg, is a retired certified public accountant. He has a younger sister, Betsy, and an older sister, Helen. Eigenberg was raised in his mother's Episcopalian religion (Eigenberg's father was Jewish).[3] His family moved to Illinois when Eigenberg was four and moved all around the suburbs of Chicago. He acted for the first time at the age of 12 in a community theater production of Kurt Vonnegut's Happy Birthday, Wanda June. While playing football at Naperville Central High School, the quarterback on his team was Sean Payton, who is now the coach of the New Orleans Saints.

After graduating from high school in 1982, Eigenberg enlisted in the United States Marine Corps Reserve, serving for three years (1982–1986), and was Honorably Discharged at the rank of Lance Corporal.

In 1996 he had a recurring role on Homicide: Life on the Street as a sniper named Alex Robey. In 1997 he had a recurring role in The Practice as DA Harvey Welk. In 1999 he appeared in three episodes of Soldier of Fortune Inc. as Nick Delvecchio. From 1999 until 2004 he guest starred in 41 episodes of Sex and the City as Steve Brady, the love interest of main character Miranda.

In 2001 he had a recurring role on Ed as Jeff Alexander. In 2002 he appeared in two episodes of Third Watch as Officer Benny Ross. He also appeared in King of Queens and The American Embassy that year. In 2004 he appeared in Touching Evil, The Jury, The 4400, Without a Trace and Everwood. He voiced the role of Nermal in the movie Garfield. In 2005 he appeared in Judging Amy, CSI and an episode of Ghost Whisperer alongside Jennifer Love Hewitt. In 2007 he appeared in Close to Home and Monk. He also appeared as a suspect in the 6th episode of the TV series Raines, which was created by Justified show runner Graham Yost.

In 2008 he reprised the role of Steve Brady in the Sex and the City feature film. He also appeared in CBS's NCIS as a former NSA Analyst who was suspected of mishandling classified information. In 2009 he appeared in an episode of ER during the show's fifteenth and final season as Detective Trent Mallory.

In 2010 he guest starred in two episodes of the first season of Justified as criminal fixer Arnold Pinter. The character appeared in "Fixer" and "Hatless". He also appeared in an episode of Criminal Minds and again played Steve Brady in Sex and the City 2.

Since appearing in Justified he has guest starred in Private Practice and Castle.