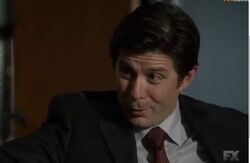 Name
David Vasquez
Birthplace
Unknown
Birthdate
Unknown
Age
40s
Status
Alive
Cause of Death
Affiliation
US Attorney
Actor
Rick Gomez
David Vasquez is a recurring character in Justified. Vasquez is an assistant U.S. Attorney who was initially investigating Raylan Givens's shootings, as well as the case with him, Ava, and Boyd Crowder, but since dropped the case against Raylan and recurringly helps out the Marshals service whenever he can. Vasquez is portrayed by guest star Rick Gomez.

Vasquez is an assistant U.S. Attorney investigating Raylan's shootings as well as the Boyd/Raylan/Ava case. Vasquez's partner in the investigation turns out to be none other than Raylan's ex-wife and former lover Winona Hawkins.

Vasquez's first appearance is in the episode "The Lord of War and Thunder". In this episode, he is meeting up with Ava and her lawyer to talk about the night Boyd Crowder was shot. Vasquez's assistant is out, and his replacement is none other than Winona, who after hearing that the case is about Raylan, causes the meeting to end in a conflict, and she leaves telling Vasquez to tell Ava and her lawyer that she had very important court business to take care of.

Vasquez appears in the very next episode "The Collection", where Vasquez is formally introduced to Raylan. Vasquez tells Raylan that he is investigating Raylan's shootings and that he would like to talk to him. Raylan tells Vasquez that Tommy Bucks pulled on him first and that the killing was justified, but as usual, Vasquez does not believe him.

Vasquez plays a bigger role in the episode "Blowback". Vasquez is present in the Marshal's officer whenever Cal Wallace holds two police officers hostage in the locker room. Initially, Raylan is sketchy about trying to negotiate with the ex-con with Vasquez in the room, but Art tells him to not worry about Vasquez. Vasquez also reassures Raylan that they are on the same side with this one, and says he doesn't care if Raylan shoots Wallace. Vasquez also supports Raylan's decision to get spicy fried chicken as a way to lure Wallace out. After the hostage situation is resolved, a meeting begins between Art, Raylan, and Vasquez. Vasquez asks questions about Ava as well as shows photographs of Raylan and Ava, much to Raylan's displeasure. Vasquez then explains that Boyd's lawyer will "strongly suggest" that Givens began his relationship with Ava before he was reassigned to Kentucky. "We're going to have to release Boyd Crowder," Vasquez says. The bottom line is that the entire case against Boyd is predicated on the testimony of Givens and Ava, who are both "compromised." Vasquez then advises Givens to stay away from Boyd and Ava both.

In "Fathers and Sons" Vasquez is brought in by Raylan and Art to talk to Arlo. Arlo wants $100,000 to give to Bo to get back on Bo’s good side, and Vasquez promises twenty thousand dollars, telling Arlo to tell Bo he would work off the rest, to which Arlo suggests blanket immunity. Vasquez tells him he will see what he can do.

Vasquez returns in the episode "Watching the Detectives". He is first seen talking to judge Mike Reardon, who is going over the indictment of a court case involved red-tail hawks that were captured and sold with Vasquez. Reardon tells him to do the indictment verbatim and he tells him to consider it done. Reardon says he doesn't consider it done until it's done and tells Vasquez to leave. Vasquez calls him a "speedo wearing lunatic" under his breath as he walks away. FBI agent Jerry Barkley stops him, wanting to have a look at the file Vasquez made on Raylan during the first season. Barkley requests an indictment against Raylan from the AUSA but is denied because Barkley will not disclose why he was tempted to look at the file between Raylan and Boyd. Raylan also asks Vasquez if he can see that file he made, but he tells Raylan that he can copy it if he writes down all the stuff that he shouldn't have done.

In "Guy Walks Into a Bar", Raylan tries to get Vasquez to help assist him in keeping Dickie Bennett in prison. Raylan suggests striking a deal with Wade Messer, but Vasquez reveals that because Messer was an accomplice in hanging up Raylan from a tree and torturing him that if Dickie is released, Messer walks as well. Vasquez also wants to avoid any lawsuits, and tells Raylan that if he can find something legit to use against Dickie that he will listen, otherwise Dickie is going to be pardoned. Raylan decides to show Vasquez a file of an African-American man who is also named Dickie Bennett in order to push back the real Dickie's parole. After Jed Berwind and his Grandma are less than cooperative to testify against Dickie, Raylan decides to do it himself. Much to Art's and Vasquez's surprise, Raylan changes his tune during the testimony and agrees to let Dickie be released, saying that by doing so the AUSA avoids a lawsuit and Dickie is their lead to Mags's stashed away money.

In "Kin", Barkley visits the Marshals office, angered that the case on Drew Thompson (as well as the FBI's files) have been turned over to the Marshals. Vasquez reveals his knowledge of Alex Barnes's corruption, and that his suicide taints Barkley's investigation on him. When Raylan shows up, Vasquez says that they offered Arlo a deal to release him from prison if he gives up the whereabouts of Drew Thompson.

In "Peace of Mind", Vasquez is at the Marshals office to help offer Shelby Parlow his WitSec deal. Vasquez says that the Marshals will be angry once they realize he also wants safety and protection for Ellen May also as part of the deal.

In "Ghosts", Vasquez shows up at Raylan's house following the killing of Nick Augustine's three henchman to connect the dots and make sure nothing has happened to compromise the ongoing case against Theo Tonin.

In "A Murder of Crowes", he is seen present at the Dewey Crowe case against Raylan.

In "The Kids Aren't All Right", he is briefly seen at the Marshals office.

In "Over the Mountain", he is at the Marshals office, looking for Wade Messer (who was acting as a confidental informant on Boyd's ongoings). Raylan suggests that he look into the Crowe family, who are likely to have murdered Messer.

In "Shot All to Hell", Raylan talks to him about reinstating Daryl Crowe Jr.'s parole while Vasquez is on the phone. Later, he is seen having a drink with Raylan and Art, congratulating Art on his apprehension of Theo Tonin and jokingly calling Raylan a dick. Before departing, he tells Art and Raylan the story about the Kentucky lawman being present at the time of Nick Augustine's murder, and tells them that Picker revealed the lawman was corrupt FBI agent Barkley.

In "The Toll", he is present at the Marshal's office during the investigation of Art's shooting, where he claims that Theo Tonin signed an affidavit, claiming that Picker was the shooter. It's also clear Vasquez has history with Katherine Hale, as he is the one responsible for prosecuting her late husband, Grady Hale. Later, Kendal Crowe confesses his story of shooting Art to Vasquez: That he drove to talk to Alison Brander, having Danny's gun in his possession because Danny gave it to Kendal so he could protect himself because he wouldn't always be around. Kendal saw the door opening and noticed a star on the man's belt and believing he was the one that killed Danny and was about to kill Kendal, he shot him in order to protect himself and his mother.

In "Starvation", he, Raylan and Mike Reardon make a play to smoke out Daryl after having exhausting their options by having Kendal tried as an adult for the attempted murder of a federal officer, which will be a mandatory 40 years to life.

In "Restitution", he talks to Rachel, Tim and Raylan, wanting their help to bring down Boyd in a RICO case before Raylan's transfer down to Florida, which Raylan easily agrees to. To do this, they release Ava from the prison and have her turn on Boyd for help with the RICO case.

In "Fate's Right Hand", David is seen in the Marshals office, where he and Rachel inform Raylan that Dewey is being released from prison.

In "Cash Game", he is briefly seen at the Marshals office along with Rachel.

In "Noblesse Oblige", David and Rachel threaten Ava to find useful information on Boyd ASAP, as it has been weeks since her release from prison and she hasn't given them anything to work with.

In "Burned", David meets with Raylan, Rachel, Art and Tim to discuss the possibility of the RICO case being compromised because of Raylan's suspicions that Ava told Boyd.

In "Trust", David is present in the office with Rachel when Raylan calls them and says that Ava says that Boyd isn't going after the truck but instead going after Markham's money as he knows it is a trap. A frustrated David tells Raylan that he is pulling the CI deal as Ava has not held up her end because she hasn't given them any solid evidence to stick the RICO charges on Boyd. However, David later learns that Ava was right all along as two of Boyd's associates, Carl and Earl are instead arrested and Boyd is not with them.

In "Fugitive Number One", David rants to Art and Rachel his belief that Raylan and Ava conspired together to steal the $10 million together right under the Marshals noses as Raylan, who normally loves to shoot his gun, did not draw on either Boyd or Ava and that if that is the case, it could be a career-ending move for him and Rachel. David even suggests that Raylan promised a cut of the money to Art, which angers the latter.

In "Collateral", David gives Duffy back all of his possessions as Duffy is no longer part of the CI deal and asks Duffy before he leaves if he was the one responsible for killing his former boss Simon Poole, which Duffy responds that he doesn't know anything. David later learns that there is a bulletin about Raylan, still holding onto his belief that Raylan has conspired with Ava to steal the $10 million and issues a BOLO on Raylan, planning to indict him once he is arrested.

Retrieved from "https://justified.fandom.com/wiki/David_Vasquez?oldid=20459"
Community content is available under CC-BY-SA unless otherwise noted.