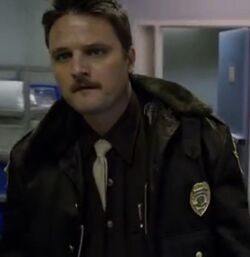 Deputy Stiles is a recurring character in the sixth season of the FX series Justified. Stiles is a dirty cop working on Avery Markham's payroll. He is portrayed by guest star Chad Todhunter.

In "Fugitive Number One", he accompanies Carl to the hospital so that he can find out where Markham's money is from Boyd Crowder and execute him afterwards. However, Carl punches him and pistol whips him twice into unconsciousness.

In "The Promise", Raylan Givens and Art Mullen locate him at a bar in order to find out where Markham has Ava Crowder captured, which Stiles divulges when Raylan takes advantage to Stiles' sensitivity to sound following the assault by slamming a baseball bat onto the bar counter several times.

Retrieved from "https://justified.fandom.com/wiki/Deputy_Stiles?oldid=20629"
Community content is available under CC-BY-SA unless otherwise noted.