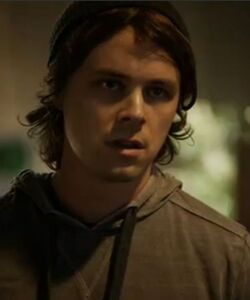 Derek Waters was a recurring character in the FX series Justified. He is a pot dealer and the ex-boyfriend of Loretta McCready. He is portrayed by guest star Riley Bodenstab.

In "The Kids Aren't All Right", Derek is sitting at the police station when Raylan Givens departs. He pleads with Raylan to help Loretta, but Raylan brushes him off. Raylan later visits him at his home and tells him to break up with Loretta. He is abducted later that night by Roscoe and Jay who want him to dig up money that he and Loretta buried, but they figure out Loretta moved the money behind Derek's back and prepare to execute him until Raylan shows up and subdues Roscoe with a shovel. It's revealed that Loretta set Derek and herself up with Rodney Dunham, and after Raylan defuses the situation, he drops Derek off at a bus stop.

In "Collateral", Loretta and Derek hide out inside of a barn when they are found by Boon, who continues to intimidate and harass Loretta and enters a standoff with Derek, who Boon shoots in the shoulder during a standoff. When Markham arrives to the barn, Loretta listens as Markham promptly shoots and kills Derek.

Retrieved from "https://justified.fandom.com/wiki/Derek_Waters?oldid=20019"
Community content is available under CC-BY-SA unless otherwise noted.