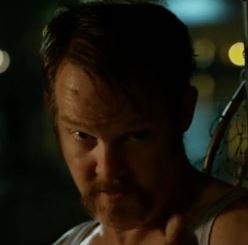 Dylan "Dilly" Crowe is a guest character in the FX series Justified fifth season episode, "A Murder of Crowes". He is the brother of Daryl, Danny and Wendy Crowe and a member of the Crowe family based in Florida. He is stabbed to death by Danny, under orders from Daryl, when his actions against Simon Lee create a federal case for the Crowe family. He is portrayed by guest star Jason Gray-Stanford.

Dilly is a member of the Crowe family based in Florida. He is depicted as being the most dim-witted member of the family and is known for his stuttering.

In "A Murder of Crowes", Dilly and Elvis Machado visit Simon Lee, a rogue Coast Guard, to pay him for his part in their criminal enterprise--the smuggling of contraband sugar to sell below market value to candy companies. Dilly ends up killing Simon after he continuously makes fun of Dilly's stuttering. This puts Machado under federal investigation for the missing Coast Guard. Dilly is later stabbed to death by Danny Crowe under orders from Daryl Crowe Jr. for making a federal case for the Crowe family. It is likely that his body was fed to gators.

Retrieved from "https://justified.fandom.com/wiki/Dilly_Crowe?oldid=18373"
Community content is available under CC-BY-SA unless otherwise noted.