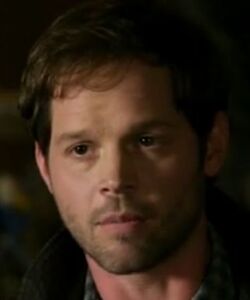 Name
Doc Stern
Birthplace
Harlan, Kentucky
Birthdate
Age
Unknown
Status
Deceased
Cause of Death
Shot to death by Tanner Dodd
Affiliation
Doctor, Dixie Mafia
Actor
Randolph Adams
Doc Stern is a recurring character in the second and third seasons of the FX series Justified. Stern is a doctor who watches over an injured Ava Crowder after she is shot by Dickie Bennett in the episode "Bloody Harlan". It is revealed in "Thick as Mud", that he has been writing prescriptions for the Dixie Mafia in exchange for protection and Oxy. Stern is shot and killed by Tanner Dodd in "When the Guns Come Out". Stern is portrayed by co-star Randolph Adams.

Stern is a doctor who has affiliation with the Dixie Mafia.

In "Bloody Harlan", he is called upon by Boyd Crowder to watch over and help Ava after she was shot by Dickie Bennett in the chest.

In "Thick as Mud", Boyd invites him down to his bar. Stern asks Boyd if Ava has been doing her exercises for rehabiliation, but Boyd tells him he isn't there to talk about Ava. Boyd reveals that he knows that Stern has been writing prescriptions for protection and Oxy, and Stern reveals that Frankfurt (Dixie Mafia) was offering. Boyd asks him to sell the Oxy and give him the profits, but Stern says that if he does that, they will kill him. Boyd says that they will protect him, but threatens his mother if Stern refuses to help Boyd.

In "When the Guns Come Out", Stern is now working for Boyd, selling the Oxy and shipping him the money. Trixie and Ellen May visit him wanting Oxy in a big bottle, but Stern gives them a smaller bottle and tells them that is all they are getting. The two girls soon attempt to resort to seducing Stern so that he gives them more oxy. Tanner Dodd and Teddy bust into the house, and they shoot and kill Rip who is keeping watch in the living room. Stern pulls out a handgun from a drawer in his desk, but Tanner shoots him in the stomach, as well as shooting Trixie. Stern is then shot one final time by Tanner, which kills him.

Retrieved from "https://justified.fandom.com/wiki/Doc_Stern?oldid=17335"
Community content is available under CC-BY-SA unless otherwise noted.