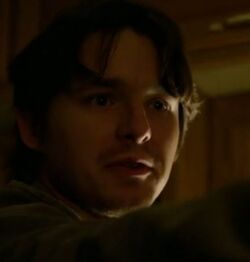 Donovan is a supporting character in the FX series Justified Season 3 episodes "Guy Walks Into a Bar" and "Measures". Donovan is a close friend of Brady Hughes, the Detroit street hustler that Robert Quarles held captive, tortured and ultimately murdered. Donovan comes to Harlan to avenge Brady's death but ultimately winds up being held hostage by Quarles. In "Measures", he is rescued by Raylan Givens and Art Mullen, who tracked down Partlow inside of Quarles's hotel room. Donovan is portrayed by guest star Marshall Allman.

Donovan is a close friend of Detroit street hustler Brady Hughes, who was held hostage, tortured, and ultimately murdered by Robert Quarles.

In "Guy Walks Into a Bar", he shows up at Wynn Duffy's mobile RV and holds both men at gunpoint. He points the gun at Quarles and it soon becomes clear that the young man believes Quarles is responsible for his street hustler friend, Brady Hughes, going missing and likely having been killed. Quarles talks the boy down, explaining that his own father was a heroin addict who pimped him out to other men. When Theo Tonin caught wind of this horror, he offered Quarles the chance to kill his old man. The 14-year-old Quarles did just that. So, Quarles explained, he understood Brady only too well and only wanted to "set him free." Quarles, who is crying and shaking, pushes the muzzle of Donovan's gun away and embraces the confused teenager. At the end of the episode, Quarles, who has stripped down and is under the influence of cocaine is seen going into a bathroom, where Donovan is bound to the toilet and gagged presumably raping him.

In "Measures", he is discovered in the bathroom of Quarles's hotel room by Partlow, one of the gun thugs hired by Theo Tonin to kill Robert Quarles. Partlow asks why Quarles would go to Harlan, but Donovan says that Quarles barely speaks to him. He headbutts Partlow, and breaks free from his chains around the toilet. Partlow soon holds him hostage when Raylan Givens and Art Mullen show up. He threatens to shoot and kill Donovan, but Art ultimately saves him by shooting Partlow in the leg.

Retrieved from "https://justified.fandom.com/wiki/Donovan?oldid=21721"
Community content is available under CC-BY-SA unless otherwise noted.