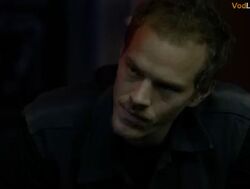 Earl Lennon is a recurring character in the sixth season of the FX series Justified. Earl is a new member of Boyd Crowder's criminal enterprise and the younger brother of Carl. He is portrayed by guest star Ryan Dorsey.

Not much is known about Earl's background, but it is revealed in "Noblesse Oblige" that Earl is the younger brother of Carl.

In "Fate's Right Hand", Earl is present during the bank robbery and also when Boyd breaks open the bank deposit box to reveal a ledger and documents.

In "Noblesse Oblige", Earl shows up at Tyler Kent's house, wanting enough Emulex to blow up the safe at The Portal. After US Marshals Raylan Givens and Rachel Brooks leave, Earl forces Tyler to help rob his father of the Emulex explosives at gunpoint, as a safer way of getting the explosives without getting in trouble. However, they are intervened by Luther, Raylan and Rachel

In "Cash Game", Earl finds Dewey's alligator necklace while cleaning up the bar and puts it on before placing it on top of a stuffed squirrel.

In "Sounding", Earl (along with The Pig and Carl) later accompany Boyd and Zachariah Randolph in order to get inside of an old mineshaft that dead ends 187 yard from the vault, but trigger an explosion due to the sparks from a buzz saw, although nobody is killed. Earl is blasted back into a pond and has loss of hearing due to the explosion.

In "Alive Day", Earl is ordered by Boyd to stay at Ava's home while they are gone on the mission to clear the mine shaft in case Markham and his men decide to show up.

In "Dark as a Dungeon", Earl takes Ava home by Boyd's orders and the two find that Ty Walker is waiting there inside of the house. Ava is forced by Walker to bind Earl to a chair but he is released whenever Boyd comes back home. After Raylan mentions the $100,000 bounty on Walker's head that was issued by Markham, Walker knocks Earl out to keep from being handed to the authories and runs out of the house.

In "Burned", he is seen at the bar with Boyd and Ava as Boyd runs over the heist plan with them. Later, he is seen by Ava's side at Markham's party while they wait to receive the go-ahead from Boyd.

In "Trust", Earl is seen staking out the armored truck supposedly carrying Markham's $10 million and waiting for it to leave. Carl and Earl ride together to pursue the truck under Boyd's orders, only to end up arrested due to it being a trap set by the Marshals.

In "Fugitive Number One", Markham and Boon visit Carl and Earl in jail and tell them that they know that Boyd set them up for the fall while he went after the actual money. Markham forces Carl to find out where the money is and execute Boyd afterwards by threatening to have Boon shoot Earl if Carl fails the task. After learning that Carl was killed, Markham still orders Boon to carry out the hit on Earl as the deal is still ongoing, but Raylan manages to intervene just in time and take Earl under his custody from the dirty cops before they can send Earl off to be executed. Raylan offers Earl protective custody from the Marshals service if he testifies against Markham in court. Earl tells Raylan that he didn't hear anything about the robbery from Ava and Boyd, but does remember hearing them talking about pigshit trucks and someone named Grubes back when Walker was held up in their house.

In "Collateral", Art Mullen and Tim Gutterson find Earl still sitting inside of Raylan's car from the night before. Earl is later seen being brought into the Marshals office by Tim.

Retrieved from "https://justified.fandom.com/wiki/Earl_Lennon?oldid=21109"
Community content is available under CC-BY-SA unless otherwise noted.