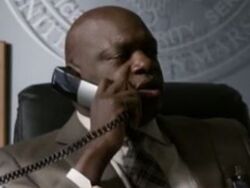 In "The Kids Aren't All Right", Art Mullen calls Ed with his suspicions of Sammy Tonin's whereabouts the night that Nick Augustine was killed.

In "Over the Mountain", he calls Art back, saying he has more than a tidbit of information and the two schedule a meet that night in Detroit. Ed has picked up Al Sura, one of the two Canadians who were associates of Tonin.

In "The Toll", Kirkland comes down to Kentucky to act as an interem Chief Deputy during the investigation of Art's shooting. Raylan learns that Kirkland wants to keep him close as Raylan is the "problem child" of the Marshal's office. After Kendal's "confession", Kirkland departs and hands Rachel Brooks a sheet of paper, proclaiming her as the new interem Chief Deputy.

Retrieved from "https://justified.fandom.com/wiki/Ed_Kirkland?oldid=17687"
Community content is available under CC-BY-SA unless otherwise noted.