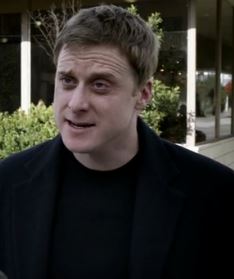 Elias Marcos is a guest character in the FX series Justified fifth season episode, "Shot All to Hell". Marcos was Theo Tonin's consigliere, sent to Kentucky to track down Ethan Picker as revenge for the murder of Sammy Tonin. He is shot in the back and killed by Raylan Givens while attacking Art Mullen and Raylan at a shipping warehouse with an automatic shotgun. He is portrayed by guest star Alan Tudyk.

He was Theo's consigliere when they went to Tunisia. He is Greek and speaks fluent Greek.

In "Shot All to Hell", Marcos talks to Al Sura beside his car, telling him that he knows Sura was detained and gave information to the Marshals. Sura tells Marcos that he told them what he heard, that a Kentucky lawman was present the night Nick Augustine was murdered and he told them it was Picker. Marcos shoots Sura to death shortly afterwards.

Later, he waits outside of a diner that Wynn Duffy, Picker and Mike are inside. Art notices him and there is a brief standoff between the two men before Marcos departs. Soon, he comes back just as Art is ready to detain Picker and take him back to the Marshals office and Marcos says that he is there to give Picker a ride. Art tells Marcos to leave in 10 seconds or he will shoot him. Marcos departs, but threatens Picker on his way out.

Through coercion by Raylan, Picker gives up Marcos's location, and Art and Raylan track him down to a shipping warehouse where Marcos ambushes them with an automatic shotgun. As Marcos is reloading, Raylan sneaks behind crates and fatally shoots Marcos in the back, killing him.

Retrieved from "https://justified.fandom.com/wiki/Elias_Marcos?oldid=21353"
Community content is available under CC-BY-SA unless otherwise noted.