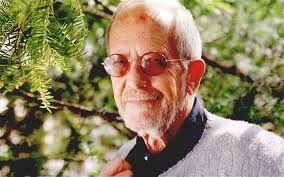 Elmore John Leonard Jr. (born October 11, 1925), better known as Elmore Leonard, is an American novelist and screenwriter. His earliest published novels in the 1950s were westerns, but Leonard went on to specialize in crime fiction and suspense thrillers, many of which have been adapted into motion pictures.

Among his best-known works are Get Shorty, Out of Sight, Hombre, Mr. Majestyk and Rum Punch, which was filmed as Jackie Brown. Leonard's short stories include ones that became the films 3:10 to Yuma and The Tall T.

He created the character of Raylan Givens for his novel Pronto (1993). The novel focuses on Harry Arno, an elusive Miami bookmaker who Raylan is charged with keeping in custody so that he can testify against his former boss. Pronto also featured the character Tommy Bucks who appeared in the Justified pilot. Pronto also features Earl Crowe, a lowlife hitman from a large criminal family - the Crowe family eventually appeared in the fifth season of Justified.

Leonard returned to the character again following the success of Justified. He featured him in the novel Raylan (2012).

On August 20, 2013, Leonard died from complications following a stroke. The fifth season premiere episode, "A Murder of Crowes" began with a 90-second tribute to Leonard.