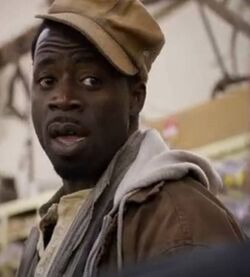 Name
Errol Butler
Birthplace
Noble's Hollow, Kentucky
Birthdate
Unknown
Age
30s
Status
Alive
Cause of Death
Affiliation
Limehouse
Actor
Demetrius Grosse
Errol Butler, played by guest star Demetrius Grosse, is a recurring character in the  FX series Justified . He is the right hand man of Noble's Hollow protector Ellstin Limehouse and is present when Limehouse reprimands Bernard for falling asleep on guard duty. Errol's shady moves meant to increase Limehouse's power eventually get him kicked out of Noble's Hollow but he returns to protect him from Robert Quarles, taking a bullet and getting back into Limehouse's good graces.

He has had his hand mutilated with water and lye for failing Ellstin Limehouse at some point. He remains a loyal follower of Limehouse and appears to be more of his right-hand man more than his other henchman. Unlike his other colleagues Bernard, Cornelius and Avant, Errol will sometimes go out of his way to make moves to increase Limehouse's power in Harlan County, most of which Limehouse does not approve of due to him wanting to keep Noble's Hollow out of the public eye. Also unlike his henchman, Errol isn't as loyal to Limehouse, wanting to turn on him any chance he gets. However, after taking a bullet and defending Limehouse against Robert Quarles, Limehouse and Errol are shown to be on much better terms when Errol reappears in the episode "Sounding", resuming his position as Limehouse's right-hand man.

His first appearance is in "Cut Ties", when he is present when Ellstin Limehouse reprimands Bernard for falling asleep on guard duty. Limehouse offers Bernard a choice between giving his word not to make a further mistake on penalty of death or having his hand mutilated with lye and water. Bernard opts to give his word. Errol has a scarred hand that suggests he chose the other option when faced with similar circumstances in the past.

In "Harlan Roulette", He accompanies Limehouse to the bridge into the hollow when he meets with Boyd Crowder. He later picks up the remaining Bennett weed from Boyd. He insists that Boyd take an envelope of cash as payment because Limehouse does not like to be in anyone's debt.

In "The Devil You Know", he attempts to drive across the bridge leaving from Limehouse's hollow when he is stopped by Rachel Brooks and KSP officers at a checkpoint, and Rachel orders him to turn around, but he refuses to do so. Rachel tells him she will have to investigate the truck, but he assures Rachel that all he is carrying is just pig feces. Rachel then puts on a rubber glove, and Errol turns around and takes an opposite direction to head to Mags Bennett's old store. He shoots and kills Combs, when Combs attempts to make a run for it out of the door in the back of the general store after witnessing Junior being shot and killed by Limehouse, who unknown to the two men, was hiding in the room after taking an "underground railroad" passage to evade the police checkpoint. Limehouse soon orders him to surrender his shotgun to Dickie, after Dickie says that a shotgun is the only thing he wants from Limehouse.

In "Thick as Mud", he is seen talking to Limehouse in the shed, where they have the cooler full of money from the last episode. He begins to question Limehouse's motives, asking him what Dickie will do if he finds out he was lied to, saying that he will come up here looking for the money. Limehouse tells him they will stop Dickie, and the henchman suggests having Dickie killed by inmates whenever he returns back to Trumbull. Limehouse informs the henchman it's not the deal he made with Mags, and begins to grow suspicious and question his henchman, saying that he is probably dreaming of all the living he could do with the $3 million. Limehouse tells him that dream will get him killed quicker than a bullet.

In "When the Guns Come Out", it turns out that he had recruited Tanner Dodd to shoot up Boyd's Oxy house. His motive for doing so was to cause a war between Frankfurt and Crowder's gang, so that they would eliminate each other and Limehouse could step up and run the Oxy business. Limehouse, however, is angered at his henchman for being foolish. Limehouse tells him that they as black people have survived on their own in the hollow for 15 decades by standing among themselves and not provoking the underlying hostility against them deep below the surface but still very much there. Limehouse asks him what they will do if the war comes to their doorstep, but his henchman assures him that they have guns as well. Limehouse says that Harlan will take it personal if they start killing white people and that his henchman had "exposed" them and that if blood spills, then it will be on his hands. Limehouse reprimands him by telling him to make things right with Trixie's family, and to make sure that the hired person that was used to hit the clinic is dead or silent, and then he will witness Limehouse finish what his henchman has created.

In "The Man Behind The Curtain", Errol, who had organized the attack on the Dixie Mafia's oxy clinic without his boss' say so, prepares to process the triggerman Tanner Dodd with a power spray nozzle as he has been doing to a hanging hog carcass. "Quarles knows I did this, I'm a dead man!" yells a desperate Tanner, on the run from both the law and other criminals. Limehouse enters to halt Errol. Later, he knocks out Arlo Givens after Arlo attempts to pull out a gun and shoot Limehouse.

In "Loose Ends", Errol informs Limehouse that Imogene Dodd, Tanner's mom, has called Tanner and told him the Marshals are looking for him. Limehouse orders Errol to tag along with him and make sure all loose ends are tied so that nothing can be traced back to them. However, Raylan Givens spots Errol leaving Imogene's house after bringing her the stolen money from Lemuel Becket and heads up to his hollow to get answers.

In "Guy Walks Into a Bar", Errol tells Limehouse that Dickie will soon be released, much to Limehouse's displeasure who refers to Dickie as a thorn in his side. "Dickie sniffs around long enough, he's going to figure out where his mama's money is," Errol warns. Limehouse says to him, "When he shows up, you bring him to me."

In "Measures", Errol arrives at Trumbull shortly after Dickie's release. Errol once again offers him the cooler full of money, but Dickie learns it contains the same amount of money from Limehouse's previous offer. Dickie then calls Limehouse's character into question for stealing Mag Bennett's money, and Dickie's inheritance. That talk earns a slap from Errol, who nevertheless offers Dickie a ride. Dickie refuses and takes a cab instead. Later, Errol arrives at Mags's general store, as per requested by Dickie who wants the money (apparently giving up on his scheme to get the full amount). Only this time the cooler contains $46,000. However, US Marshals Tim Gutterson and Rachel Brooks intervene, confiscating the cooler and sending up a warrant into Noble's Hollow (after overhearing Dickie revealing the location of the stolen money to be buried up under the floorboards of Noble's Church during his conversating with Rodney 'Hot Rod' Dunham via telephone). After the Marshals leave, the two men begin to talk business. Errol reveals that Limehouse has not used the church in years and that the money isn't buried under it like Dickie believes. Dickie also reveals that he knows Errol wants a share of the money and that is the only reason he is still associating with Dickie. In exchange for a cut of Dickie's money, the two men strike a deal to have Errol betray Limehouse in order to retrieve the rest of the money. The two men need back up but Errol reveals it cannot be anyone from Noble's Hollow because they are too intimidated to turn against Limehouse. Errol suggests someone with particular skills and suggests that they partner up with Boyd Crowder, much to Dickie's displeasure.

In "Coalition", he visits Boyd at Johnny Crowder's bar, seeking assistance before signaling Boyd's rival, Dickie into the bar. Boyd stares Dickie down coldly before dragging him to his office, putting a plastic bag over his head and punching him several times. Errol begs him to stop, saying that there is $3.2 million dollars of Bennett money and the only ones that can help Boyd get it are Errol and Dickie. Ava tells Boyd to let Dickie go and hear Errol's plan out, and a reluctant Boyd lets him go. Errol tells him that Limehouse stashed the money away in a safety deposit box at a bank called Galletin (unknowingly the bank has been known for it's numerous robberies). At Johnny's bar, Dickie, who like his cohort Dewey Crowe has no idea of his own limitations, very unwisely starts to demand a 70-30 split in his favor when Boyd pulls a pair of guns. Boyd soon points both guns at Errol, saying that he isn't too concerned with Dickie just yet. Boyd knows that there is no money in the bank and demands to know how Errol and Limehouse have schemed to set him up. Errol more or less admits to the ruse, explaining that Limehouse only wanted to send Boyd away to prison for a long time. Boyd soon leaves and orders Johnny to watch over Dickie and Errol. Dickie knocks Johnny unconscious after distracting him with a cue ball, and holds a gun at Errol wanting to know the real location of his money. As it turns out, Loretta had been the holder of Mags's money. Dickie and Errol take off to go to Loretta's foster home and Dickie forces Errol at gunpoint to shut himself up in the trunk.

In "Slaughterhouse", Limehouse approaches Errol. It's time for the henchman to pay for his various betrayals. "You pack your things and get out of Noble's Hollow before dark" growls Limehouse, who has an uncanny knack for knowing everything. Errol knows better than anyone to argue and leaves. As night falls, Givens drives the van into Noble's Hollow, passing Errol on his way out. Quarles, Givens, and the two boys find Limehouse in the slaughterhouse. "Mr. Quarles justs wants to go home" Givens explains. "He needs some money... You've been saying you just want to be left alone. Well, I figure this gets it done." Limehouse reluctantly picks up a knife and cuts open a hanging pig carcass. Wrapped wads of money fall out. "It's a piggy bank!" squeals a delighted Quarles. Limehouse mentions that he can't believe Givens is going to let Quarles get away with the money after killing a state trooper. "Wait, you think I killed the Trooper?", Quarles asks. Givens then asks "Who did?" At that moment Errol enters the slaughterhouse and fires his gun. He hits Quarles, who fires back, hitting Errol.

In "Sounding", he is revealed to have survived his gunshot and on much better terms with Limehouse than before. Errol is sent by Limehouse to accompany Ava to retrieve money that was stolen during a bank robbery by Boyd in exchange for a car from Limehouse. Ava, however, requests to stop at a hardware store for a shovel and attempts to ditch Errol, but he stops her. Errol is then intervened by Constable Bob Sweeney who attempts to lure him outside of the store on a bogus charge in order to Raylan to sneak Ava out. Errol refuses to go with him and a confrontation ensues, resulting in Errol being knocked out when Bob tasers him.

Retrieved from "https://justified.fandom.com/wiki/Errol_Butler?oldid=21794"
Community content is available under CC-BY-SA unless otherwise noted.