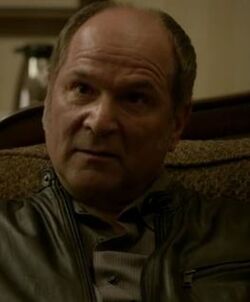 Not much is known about Picker's background, except for that his first name is revealed to be Ethan by Art Mullen in "Shot All to Hell". He is apparently Greek. When Art asks if his prominent nose is from his Greek ancestry, Picker claims his nose came from a plastic surgeon. However, Elias Marcos later speaks to him in Greek.

In "Decoy", he is present at Johnny's bar along with his boss Nick Augustine, and fellow henchman Yolo and Mort. He later accompanies Boyd to the high school where Raylan and Rachel are hiding Drew Thompson. Raylan refuses to hand Drew over and gets Picker to call in reinforcements to buy Rachel and Shelby enough time to escape Harlan. Picker, Boyd, and other henchmen return to the school, only to learn that Shelby has left.

In "Peace of Mind", he is present at Johnny's bar with Nick and a few other gang members and learns that Ellstin Limehouse is refusing to hand Ellen May over to Johnny because Boyd has made the deal. Picker then later accompanies Nick and Boyd to the home of Nicky Cush, who jumps out dressed in full body armor and orders the men to drop their weapons. Later, he disguises himself as a delivery man and puts together a rocking chair for Winona Hawkins.

In "Ghosts", Picker's distrust with Augustine is made clear when the two clash at a diner over Augustine's trust in Boyd Crowder and that he wants to keep Sammy Tonin (the new head of the Detroit mob) waiting. Later, when Sammy shows up in Harlan after being called by Raylan, Picker and Sammy's henchman shoot up Augustine's limo, killing him.

In "A Murder of Crowes", Boyd and Duffy head up to visit Picker and the struggling Detroit Mafia, where Picker subtly executes Sammy in front of them. After a brief scuffle and a gun put in his mouth by Boyd, Picker tells him that Sammy owed the Canadians almost $1,000,000 and that Picker was supposed to give them the money and kill Sammy, and in exchange, they would not kill Picker.

In "Shot All to Hell", Art Mullen manages to track Picker down to a diner where he is sitting with Duffy and Mike. Just as Art is ready to detain Picker and take him back to the Marshals office, Elias Marcos enters the diner, saying that he is there to give Picker a ride. Art tells Marcos to leave in 10 seconds or he will shoot him. Marcos departs, but threatens Picker on his way out. Picker is detained at the Marshals office, where Raylan manages to coerce him in order to get information on Marcos's location. David Vasquez later tells Raylan and Art about the Kentucky lawman being present the night of Nick Augustine's murder, and that Picker gave a name: Jerry Barkley.

In "Kill the Messenger", Picker sets Boyd and Duffy up with Yoon, a business dealer in drugs.

In "Wrong Roads", Picker and Duffy are seen at a hotel room, where Picker voices his concerns over getting in the heroin business with the Crowe family. At the meeting with Daryl Crowe Jr., both Picker and Duffy refuse to let Daryl have 20% of the cut, only allowing 10% of it because other cut would also be given to the other Crowe family members and that would be more than any of them would receive.

In "Weight", Picker is seen at the hotel room with Duffy where he learns about the stolen heroin. Picker believes that Boyd and the Crowes are a problem, telling Duffy that he doesn't understand his fascination with Boyd and that he needs to think about who he'd rather work with: Boyd, who will get him killed or Picker, who will get him rich.

In "The Toll", Picker is seen at the hotel room with the meeting with Boyd, Duffy, and Katherine Hale but they are abruptly arrested by the US Marshals when Theo claims Picker to be the shooter. Raylan informs Picker that Theo signed the affidavit and Picker questions why Raylan would think he was working with the same man who sent someone down to Kentucky to kill him and says the only name he's heard as a possible shooter is Daryl. After being released from custody, the meeting from earlier continues on, with Boyd offering to give Duffy the half of the shipment in his possession as compensation. When Katherine and Duffy leave into another room to talk, Boyd taps a packet of cigarettes he is holding and throws it at Picker, which detonates and kills him within seconds (as the cigarettes contained emulex explosive).