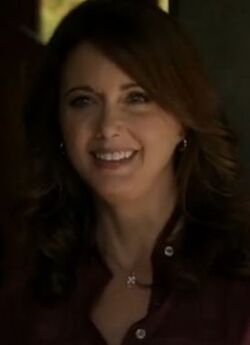 Eve Munro is a recurring character in the fourth season of the FX series Justified. Eve is a psychic and the ex-wife of the presumed dead Drew Thompson, who is taken hostage by Mason Goines, sent by his boss Theo Tonin to locate Drew. Eve is portrayed by guest star Julia Campbell.

Not much is known about her background.

In "Truth and Consequences", Raylan and Tim go to visit her to talk about Drew, who they inform her may still be alive, although she has no idea. Eve also correctly predicts that Raylan is going to meet a very bad man at a gym. When a strange car is outside, Raylan tells her to go lock up in a windowless room. The room she hides in does have a window, and she attempts to escape, but is captured by Mason. At a hotel room, she is bound to a chair and punched, as Mason attempts to interrogate her to find out Drew's location. Eve gives Mason a fake address, which is to the gym that Raylan was going to meet Randall Kusik behind. Mason attempts to kill her, but the Marshals intervene after Raylan is tipped off by Barnes. Art threatens to not have protection put on Eve if she doesn't cooperate. Eve says that her husband was burning pictures of them, and said that he was going to fake his death. She says that he had witnessed Theo Tonin murdering a government informant. Before she leaves, Raylan asks her how she knew the exact gym to send Barnes to, and she says that she has a gift.

In "Outlaw", she is seen in the Marshal's office trying to identity Drew Thompson suspects through DMV photos. Eve, however, claims that she cannot remember what Drew looked liked.

Retrieved from "https://justified.fandom.com/wiki/Eve_Munro?oldid=17883"
Community content is available under CC-BY-SA unless otherwise noted.